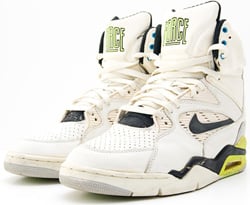 In 1972, Nike released their first basketball sneakers, the Bruin and Blazer. Both were composed of leather and spawned a legacy. Nike Basketball continued to perfect the two styles as they released the Bruin and Blazer in suede and the Blazer Low in leather the next year. However, it wasn’t until 1982 when Nike introduced the Air Force 1. The “Original Six” to wear the AF1 were Moses Malone, Michael Cooper, Bobby Jones, Calvin Natt, Mychal Thompson, and Jamal Wilkes.

By this time, Nike Basketball division was gaining popularity not only as just a sneaker brand, but also as one of the main competitors in basketball shoes. 1985 gave rise to the Air Jordan line, marketed by Michael Jordan as it debuted in stores alongside a full array of other basketball sneakers like the Sky Force Hi, Penetrator Low and many others. Nike had a major hit on their hands by drawing in one of the greatest basketball players ever, but furthered their respectable timeline with the creation of the Dunk. The Dunk and Terminator High both released in the 86’-87’ time period and were guided at college teams like Syracuse, St. John’s, Villanova, Kentucky, Iowa, Michigan and Georgetown.

Throughout the 90’s, Nike Basketball line would continue to dominate the market by snatching up the hottest players and lacing them up with their signature shoes. Some of these players include Penny Hardaway, Jason Kidd, Scottie Pippen, Charles Barkley, Chris Webber, Tim Duncan, Larry Johnson, Vince Carter, Kevin Garnett, Dennis Rodman and other athletes from different sports like Andre Agassi, Deion Sanders, Barry Sanders and Ken Griffey Jr.


Nike’s never-ending innovation has driven them for all these years and continues to do so till this day. They are still snatching the next great basketball player and show a promising future with the introduction of their Fly-wire technology and one of the key new releases, the Hyperdunk.