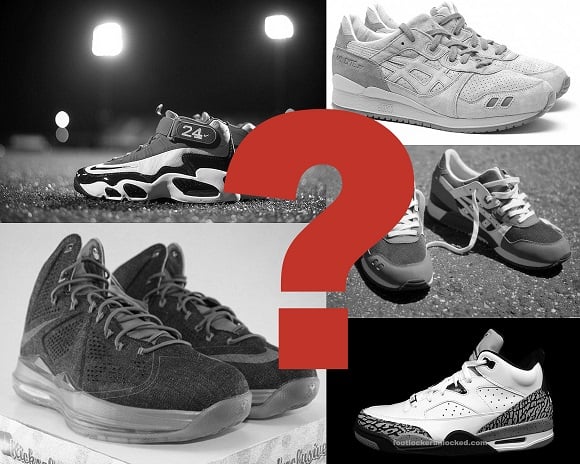 What up, sneaker fam? Glad you could make it to this week’s countdown! After a few crazy weeks of releases, we’ve finally had a bit of a break, which my wallet greatly appreciated. There was one crazy release (that most likely was the reason behind the shooting and death of a would-be robber yesterday morning), and one hugely disappointing do-over (resulting in a sneaker making the countdown for the second time), but for the most part, it was a pretty slow week(end), which made this list that much harder to come up with; usually, I have problems with deciding which shoes I should leave out, but this week, I had a problem figuring out which shoes to leave in. Without further ado, I bring to you The Official Unofficial Top 5 Kicks of The Week! 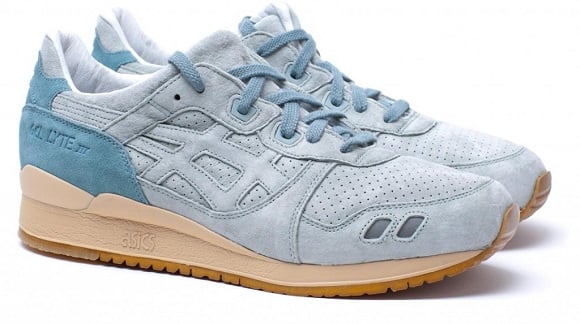 Yes, this shoe made the list before, but since they were postponed and eventually released (sort of) this week, I decided it was only right for them to be included. As I found this shoe to be very dope and was bummed out when the original release didn’t end up happening online a couple weeks ago, I made sure to follow St. Alfred’s Twitter account, so that I didn’t miss their tweet announcing when the shoes would finally be released online. Since they promised to give a 6-hour heads up before dropping the shoes on their website, I was confident I’d at least have a chance to cop myself a pair. With the time steadily approaching, I prepared myself for the drop, to give myself the best possible chance of scoring; I got my computer ready, making sure my St. Alfred’s account was logged in, pulling up their website on 2 different browsers; I even pulled up their website on my smartphone, giving myself another option, in case my laptop froze up. All of that preparation, for nothing.

Like the last failed online release, their website crashed almost immediately. I was able to get a pair in my shopping cart, but wasn’t able to complete the checkout process. Still, like the thousands of other sneakerheads at their computers, I refreshed… and refreshed… and refreshed… for at least an hour, going from adding my address, to my shopping cart, and back again, over and over, until finally, the good folks at St. Alfred decided to send out a tweet, explaining that a few malicious people crashed their servers. Since they didn’t explicitly state if the shoes were available still (and weren’t answering any of tweets asking that very question), I continued trying to check out, in the hopes that I might still be able to get a pair. After doing that for several minutes, I decided to call their store, to see if I wasn’t just wasting my time at that point. The guy that answered explained that they had, in fact, sold out, even though their website had crashed pretty much immediately, and no-one had tweeted that they were actually able to check out successfully. To which I replied, “Bulls#%@”.

Long story short, this release (and the first online attempt a couple weeks ago) was a terrible failure for both Saint Alfred and Asics. St. Alfred claimed that they were having their servers fixed, which was why they were having to postpone the release for 2 weeks, yet their servers failed again when they released the shoes. Then, instead of letting people know what was going on right away, they waited an hour before sending out an ambiguous tweet with an explanation that didn’t make much sense. Oh well, thankfully it’s only a shoe; still, I wish I didn’t waste an hour of my life over this nonsense. If you happened to score a pair online this past Friday, let us know in the comments below. Prove me wrong, internet! 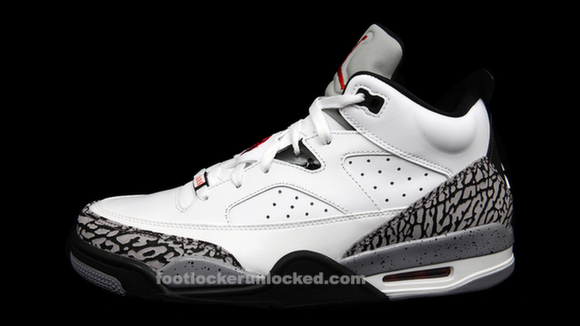 In the Number 4 spot, we have the only Jordan Brand shoe to make the countdown this week, ending their one week reign at #1, the Jordan Son of Mars Low “Cement”. Truthfully, I can’t say that I am a fan of the Jordan Son Of Mars Low; as someone who considers himself a bit of a purist when it comes to kicks, I find this shoe to be an affront to my senses. If I had never seen the Air Jordan III, Air Jordan IV, Air Jordan V, or Air Jordan VI (the shoes that make up the design of the Air Jordan mash-up), maybe I would like the Jordan Son of Mars Low (or Son of Mars, for that matter), but that’s obviously not the case. Well, now that I think about it, I actually like the Jordan Spiz’ike, so clearly that’s not the issue here. I guess I just don’t like this shoe. That being said, if I had to buy a Jordan Son Of Mars Low, this would be it. Featuring the classic “White/Cement” colorway made famous on the Air Jordan III and IV, this shoe isn’t too bad in a classic Air Jordan colorway. Now, that “Tour Yellow/Grape Ice” one, on the other hand… 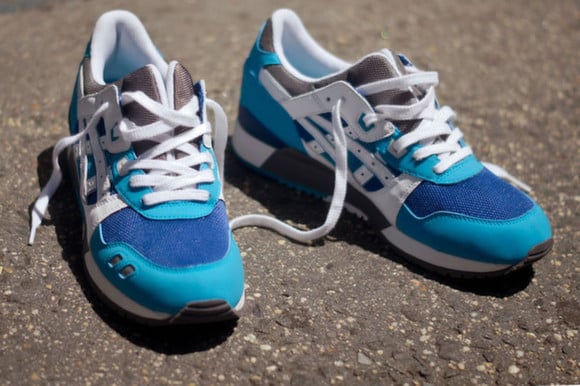 Coming in at the halfway mark, we have a shoe that caught the sneaker community by surprise; the Asics Gel Lyte III “Blue/White”. Released as one of Ronnie Fieg’s store Kith’s infamous #Kithstrikes, this shoe dropped without a single warning. Featuring a classic blue, white, and grey colorway perfect for a hot summer day, these shoes would have most likely sold well on their own, but with the Ronnie Fieg/Kith stamp of approval? Fuggedabout it! These joints sold out quickly, although not as quickly as an actual Ronnie Fieg x Asics collaboration (like the upcoming RF x Asics Gel Lyte III “Flamingo”, which will be sure to sell out quicker than you can say “hypebeast”). If you like retro Asics and/or Ronnie Fieg’s collaborations with the running shoe company, definitely follow @RonnieFieg and @KithSet on Twitter, for info on all of Fieg’s upcoming works, as well as for the elusive #Kithstrike drops (always at random). 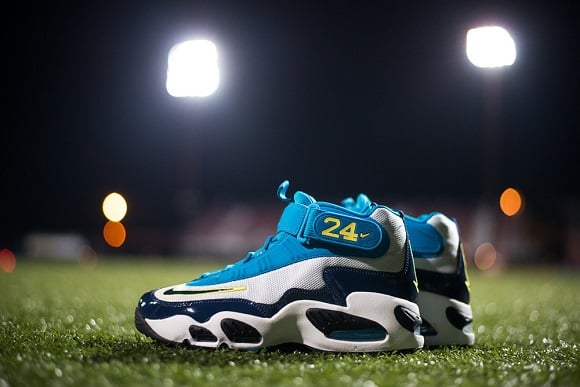 In second place, we have a 90’s classic in a fresh new colorway, the Nike Air Griffey Max 1 “Pure Platinum/Midnight Navy-Neo Turquoise”. Nike has hit the sweet spot with this rendition of Junior’s first signature sneaker, featuring a dope blue colorway that could easily have been an OG release. Personally, I’d much rather see Nike re-release old-school (jeez, stuff from the 90’s is considered “old-school” now; damn, I’m getting old…) classics in colorways that have an original feel, rather than some of the more bizarre choices they’ve made in recent memory (the Air Jordan III “Crimson” and “Joker” come to mind). Keep it simple, Nike!

With the Nike Air Griffey Max 1 “Black/Metallic Gold” and “Platinum/Black/Cool Grey/Pimento” joints also having dropped recently, the Nike Air Griffey 1 Max has been having a bit of a revival, much to the pleasure of sneakerheads worldwide. Let’s hope they continue the streak of dope colorways in the months to come; we could always use some dope trainers! 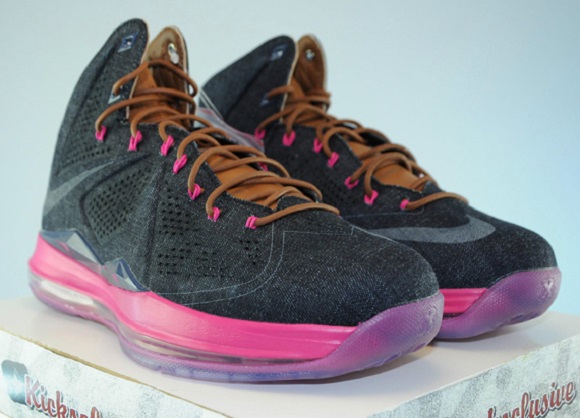 The winner of this week’s countdown probably doesn’t come as much of a surprise, as it was the only major release this weekend. With each countdown, I try to make it an even mix of my personal preference and the preference of the sneakerhead community, and this weekend, the sneakerhead community has spoken. This was a crazy release, from the shoes selling out in literally 30 seconds on Nike.com, to a sneakerhead shooting (and killing) a robber while waiting in line for the shoes. Take a super-popular sneaker, add in an a large amount of hype, and mix in some exclusivity, and you have a super-difficult cop. The fact that LeBron James just led his Miami Heat to their 2nd NBA Title in a row during the week accelerated the hype-train, leading to sneakerheads being stricken with LeBron Fever, a disease last seen during the release of the Nike LeBron X EXT “Cork”.

With the first two LeBron X EXT releases being uber-popular, is this a sign of things to come? With the Nike LeBron X EXT “Brown Suede” and “Black/Mint” set for release this year, we shall soon see. For the sake of those trying to cop a pair to rock, let’s hope that’s not the case, as it will be a very difficult purchase, at least online. My advice is to check your local stores for the next big Nike LeBron X release, as these online drops are getting harder and harder to score with; I’m pretty damn good with scoring on Nike.com (or I used to be, at least), not to mention my internet connection was at 50 mbps Saturday morning, but I still struck out. I’m not saying to totally give up on trying online, only that you shouldn’t put all your eggs in one basket; set up a game plan if you really want a shoe that you know is highly sought-after (i.e. almost every Retro Jordan/QS Nike LeBron/KD/Kobe signature sneaker).

With that, we conclude this week’s Top 5. Tune in next week to see if your favorite release made the cut. Let me know what you thought of the list in the comments below; your likes, dislikes, even your own Top 5 if you like. I’ll make sure to check the comments each week and get back to you, dear readers. Thanks for stopping by, and as always, be safe and smart out there with your sneaker purchases! Stay out of trouble, kids. Peace.