What makes the Air Jordan VI so remarkable? Could it be that the AJ 6 was worn during MJs first NBA title? 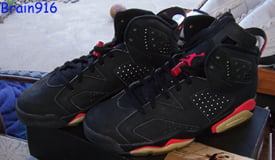 Or could it be he won his first NBA Finals MVP? Maybe it is the material, or design of the Air Jordan VI. Which ever it may be, this is one shoe to remember.

On the Air Jordan 6 Michael Jordan gave direct orders to have a clean toe, so Tinker Hatfield made sure the Air Jordan VI had a reinforcement around the toe, making the AJ VI the first basketball model to obtain this. MJ had problems putting on the past five models, 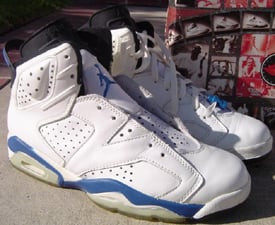 so Tinker designed two holes on the top of the tongue, and one loop on the back, calling it “a spoiler”.

The Air Jordan 6 was the second model to have the clear rubber sole. When the Air Jordan V was released a lot of people complained that their children were falling because the soles would collect dust that was on the court, making the sole slippery. Now on the Air Jordan VI Tinker added a more solid rubber, so this problem would not happen again.

Michael wanted the heel tab positioned so it did not hit his Achilles tendon, making the Jordan 6 the first shoe to have any sort of molded structure on the back. The last touch Tinker gave was incorporated the number “23” on the design of the shoe. When the original Air Jordan VI came out in 1991 there were five color way models retailing for $125.00. In 2000 three models were re-released of the Air Jordan 6, selling for $120.00, and in 2002 three low top versions came out which sold for $105.00. In 2005 Jordan Brand released a DMP which stands for “Defining Moments Package”, which consisted of the Air Jordan VI and XI. Retail is $295.00. 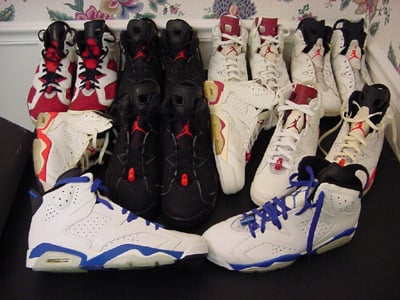