While we commonly have called this model ‘Bred’ through the years, Jordan Brand went with the Banned nickname for 2016, however most of us still refer to the 2011 outlet release as Banned.

Comparing the two, the most significant difference between the 2016 and 2001 is the difference in Red. Both will feature Varsity Red, however the 2001 retro is lighter. The quality in materials will go to the 2001 release, which uses premium leather and nubuck across the Swoosh. But the 2016 isn’t bad by any means and will have tumbled leather across the collar, heel and toe box. The Black on the paneling and overlays however is synthetic and isn’t up to par with what we had hoped.

As for the original look between the two, the 2016 Air Jordan 1 Bred release wins in that department. The shading of Red is closer to the 1985 along with Nike Air on the insoles (2001 has a Jumpman).

There are more differences between the 2016 vs 2001 Air Jordan 1 Bred release which you can see below (or above). As well, make sure to Subscribe to us on YouTube for more comparisons. 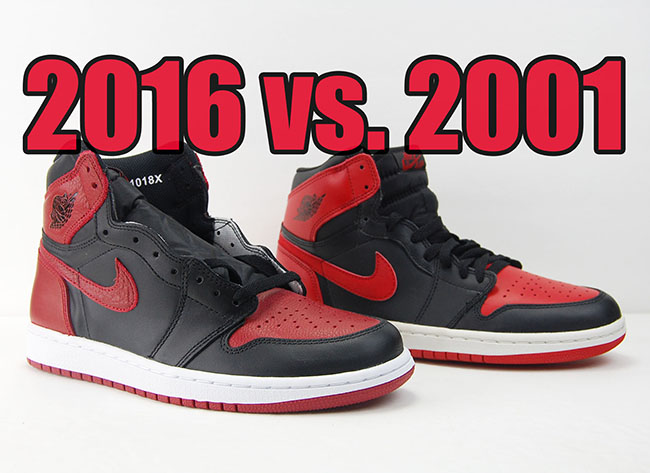