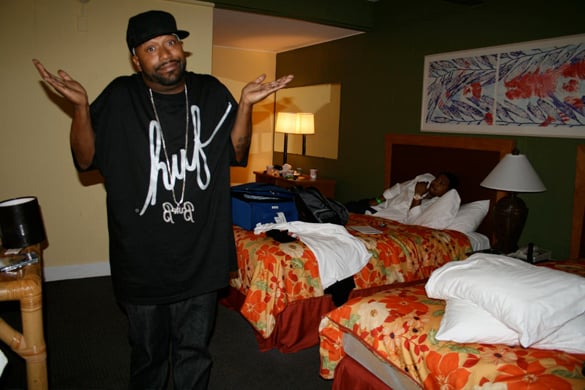 At Sneaker Files, we constantly strive to provide our readers with the hottest, newest sneaker information. Aside from the daily dosage of news, Sneaker Files also keeps updated ‘Release Dates‘ pages and an in-depth sneaker guide for Air Jordans, Nike SBs, Nike Basketball Sneakers, and Nike Running Sneakers. We also feature sneaker shops and boutiques across the U.S. and are always the first ones giving you a friendly reminder of when a sneaker is about to be released. We have incredible content and website improvements planned for 2009, and we would like to kick off the New Year with an exclusive interview with one of the our favorite gangsta rappers alive, Bun B.

While other websites may offer their bloggers’ lists of the best sneakers of 2008, Sneaker Files presents the view from the great Bun B.

Peep Bun B’s list of the top ten sneakers in 2008 after the jump! (click the “more” button below)

Bun B (born Bernard Freeman in 1973) and fellow Southern rapper, Pimp C, formed the popular southern rap duo named UGK. Both Bun B and Pimp C found much success through UGK, but that success was short lived after Pimp C was sent to jail in 2003. Bun B continued his career and is still featured in many hit rap singles to this day. He is most known for his influence in the southern rap game, but Bun B also has a passion that many are not aware of, sneakers.

The year 2008 proved to be amazing for sneakers. Releases ranged from the release of the last numbered sneaker in the Air Jordan line, the Air Jordan XX3 (23), all the way to Nike’s classic model, the Nike Air Force 1, being brought back in many new and amazing colorways in ’08. Many consider the past year to be one of the best ever in respect to sneakers and we hope it is only a sign that 2009 will be even better. We will be doing our part in ’09 to keep you updated in all aspects of the sneaker game and we hope that you find our hard work worth your time.