Yet another detailed video of a shoe that has yet to release, this time its on the Air Jordan 9 Johnny Kilroy.

We are sure most of you know the history behind Johnny Kilroy, but for those that don’t we will explain.

When Michael Jordan retired from the NBA for the first time right before the 1993-1994 season, Nike still needed a campaign for the Jordan 9. This is when Nike came up with the fictitious player “Johnny Kilroy”, which was actually Michael Jordan. The commercial stars Steve Martin and takes an “Unsolved Mysteries” approach.

In the commercial, a video known as the “Popcorn tape” is presented by Martin. It shows Michael Jordan aka Johnny Kilroy playing for the Chicago Bulls and wearing the number 4. In the crowd you will see a fan wearing a t-shirt reading “Kilroy Kicks Butt” (this is why its stitched on the inner tongue and on the insole).

The Air Jordan IX Johnny Kilroy features metallic platinum tumbled leather around the side panels, black nubuck on the uppers, the number 4 on the heel (instead of the number 23), and gym red playing the biggest role on the liner but other hints throughout. Last but not least you can see “Johnny Kilroy” on the tongue.

Not set in stone, but the Air Jordan 9 Johnny Kilroy has an expected release date of October 6th 2012 with a retail price of $160. You can grab your pair now at KickSole.com. 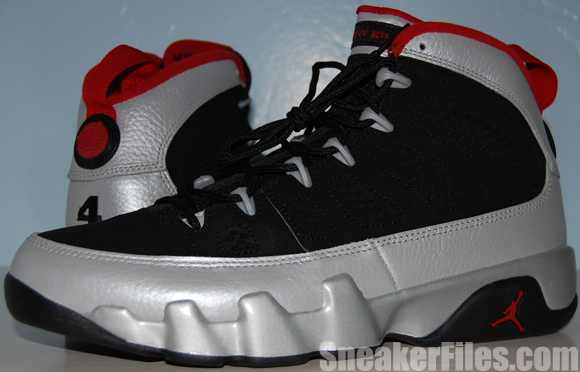