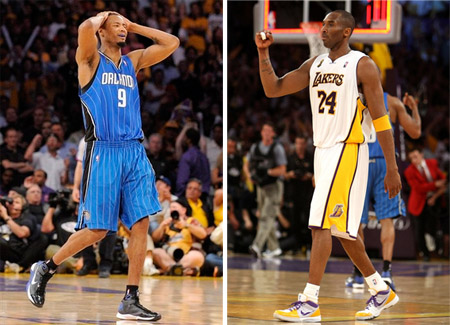 Game 1 of the 2009 NBA Finals was quite anticlimactic with the Los Angeles Lakers winning by 25 points; however, Game 2 proved to be a completely different story. The Orlando Magic rookie, Courtney Lee, missed an alley-oop attempt with 0.6 seconds left in regulation, sending the game into overtime. There, Kobe Bryant and company took over, and ended up winning Game 2 with a final score of 101-96. Though the game progressed at a relatively slow speed, it was nonetheless a great show of basketball talent and fancy footwear. Some of the sneakers on show in Game 2 included the Nike Zoom Kobe IV (4), adidas TS Lightspeed, Nike Hyperdunk, Nike Foamposite Lite, adidas TS Commander LT, Nike Huarache ’09, and the adidas Fly By. Be sure to check out the pictures from the 2009 NBA Finals Game 2 after the jump. 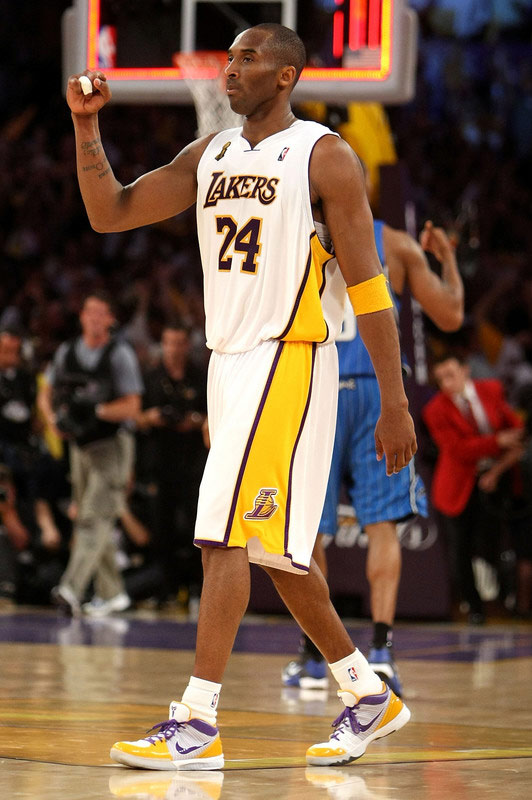 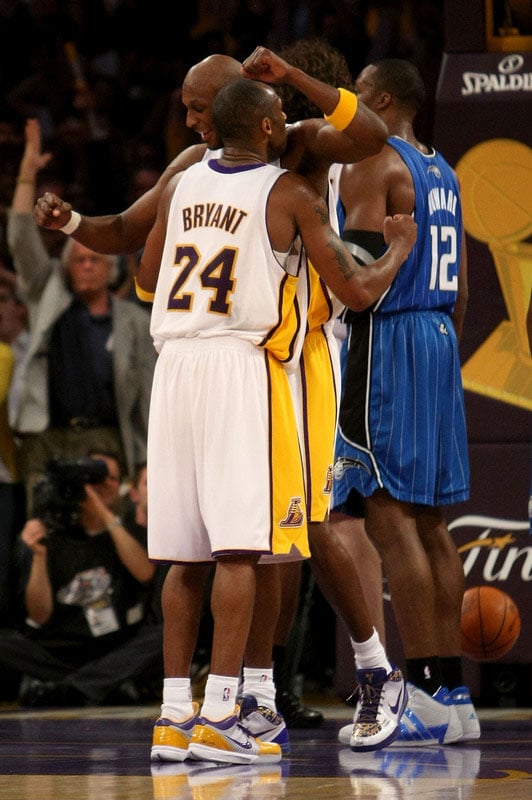 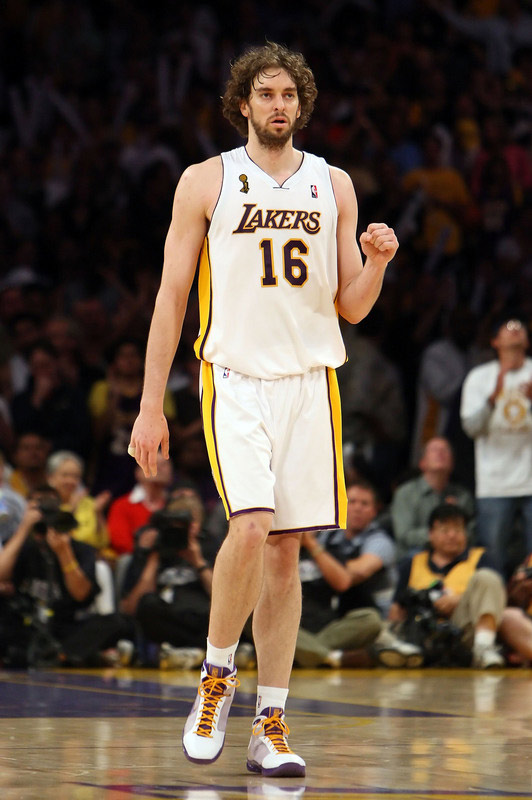 Pau Gasol in the Nike Hyperdunk 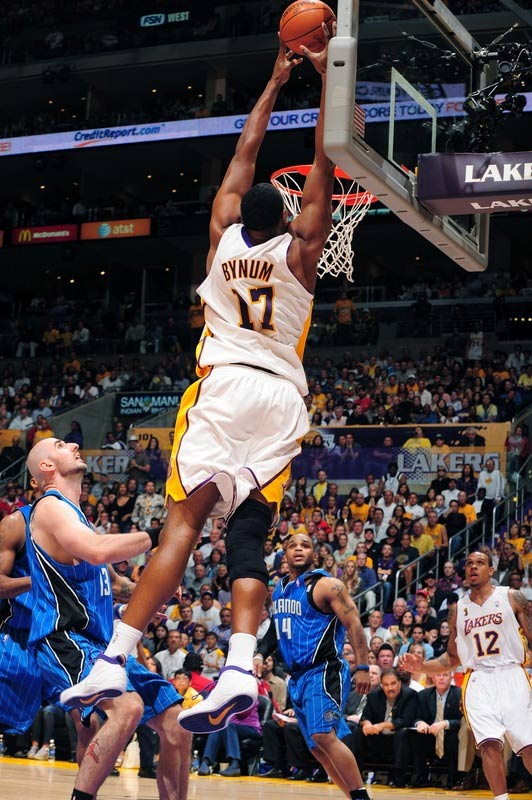 Andrew Bynum goes up for the dunk in the Nike Foamposite Lite. 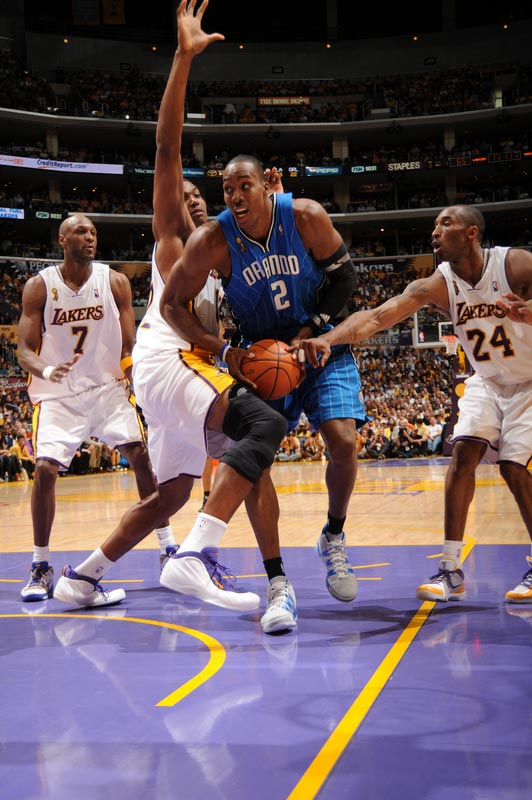 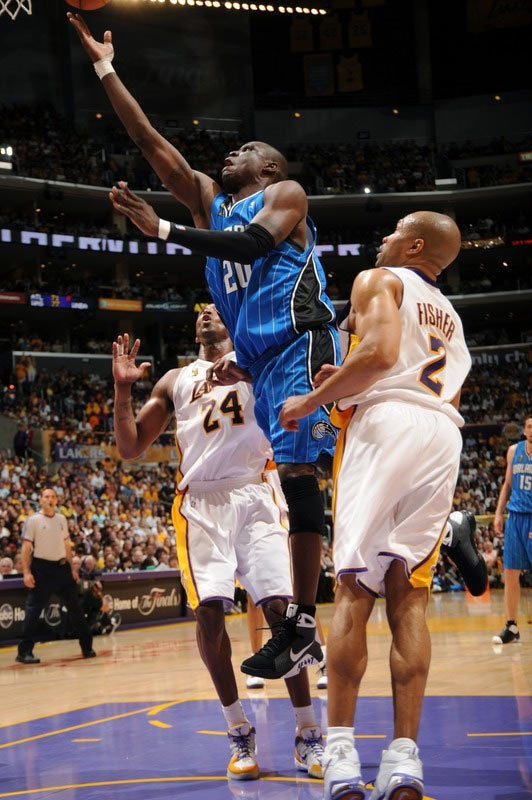 Mickael Pietrus goes up for the lay-up in a customized Nike Hyperdunk honoring those involved in the Air France crash. 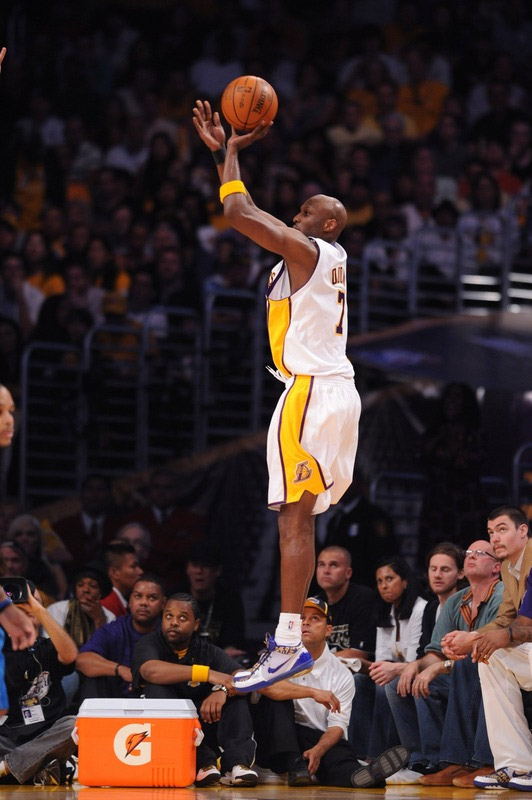 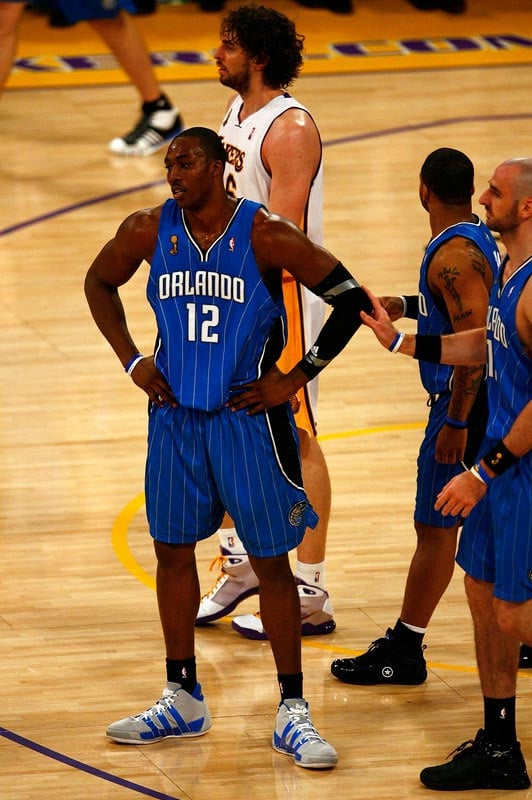 Dwight Howard poses in the adidas TS Commander LT while Gortat comforts him. 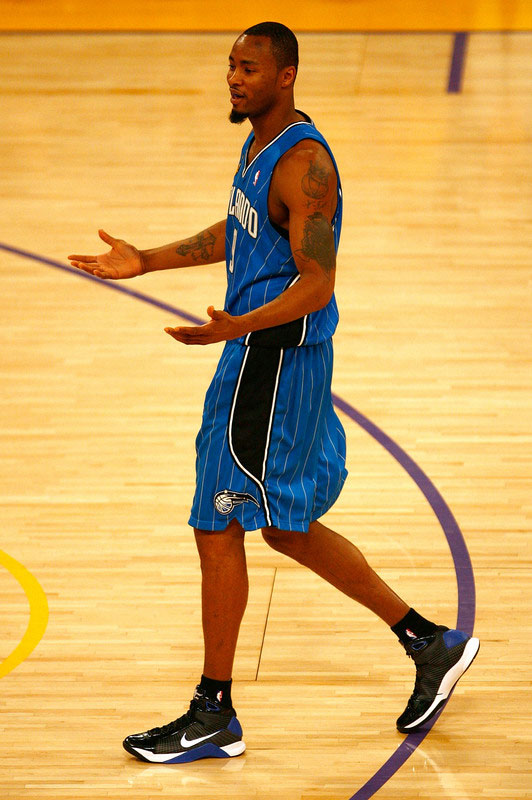 Rashard Lewis reacts to a call in the Nike Hyperdunk. 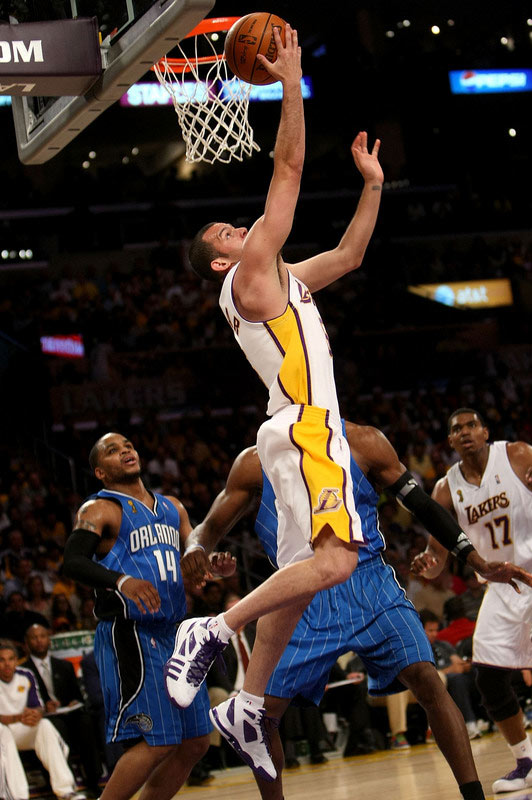 Jordan Farmar goes up for the reverse lay-up in the adidas Fly By. 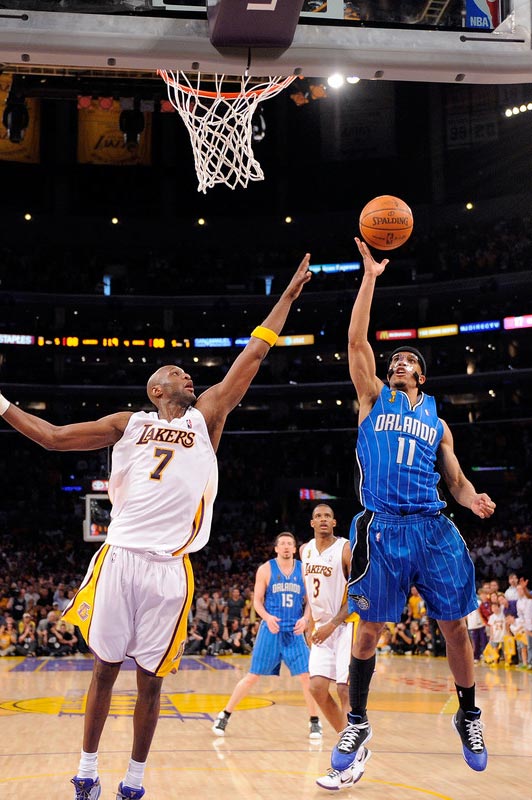 Courtney Lee shoots a floater in the Nike Huarache ’09. 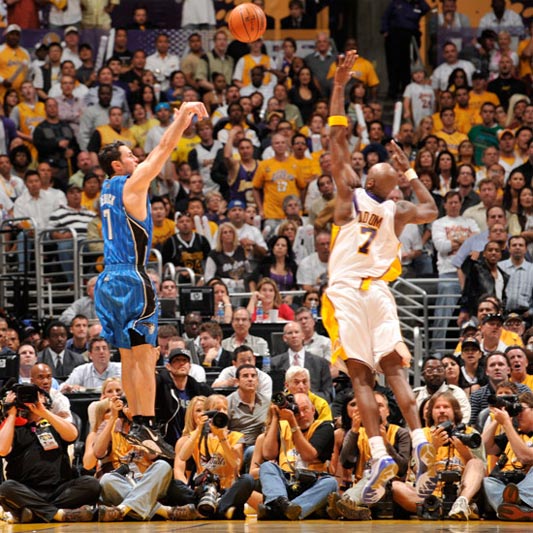 J.J. Reddick shots the jumper in a GR colorway of the Nike Zoom MVP. 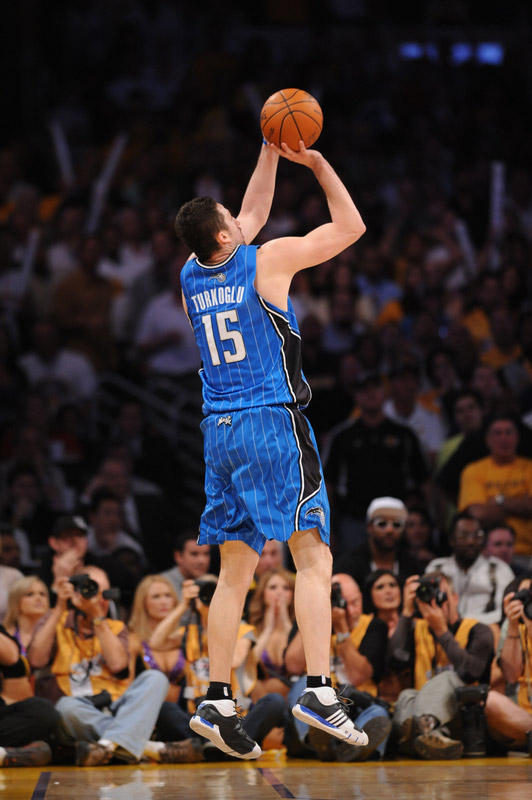 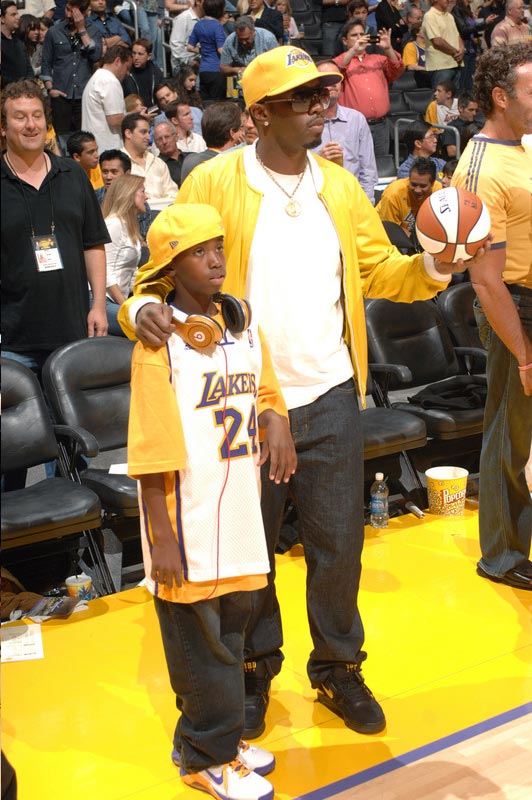 Diddy and his son attend Game 2 of the NBA Finals in the Nike Air Force 180 and the Nike Hypermax, respectively.