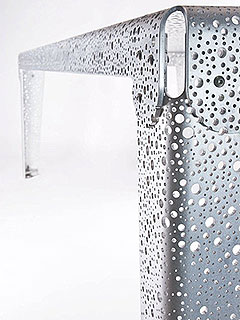 Michael Jordan recently made a purchase; no he didn’t buy another NBA franchise. The NBA great just bought himself a dining room table that’s more than just a cool piece of décor.

Nevertheless, Sirvet, a local sculptor who works in metal, knew that he would be competing against several artists for the honor of crafting a dining room table for His Airness. He wanted something that would catch Jordan’s eye, so he proposed a table drilled with one hole for every point Jordan scored in his basketball career, totaling 32,292 (The table actually has 32,296 holes if you include the holes drilled for each leveling foot, but Sirvet doesn’t count those).

“[If I were him,] I’d like to see some manifestation of my life’s work,” says Sirvet. “It’s gotta be cool to sit back and say, ‘I can quantitatively look back at every point I’ve scored.'”

Not only does the table signify each and every point racked up along his career, but also shares a striking resemblance to the midsole paint job found on the Air Jordan IV White/Cement.