A lot of hype is behind the various colorways of the Air Jordan 4’s releasing in the next couple of months. Today we are bringing you closer to one of those pairs, known as the Green Glow.

Given this Air Jordan IV nickname, Green Glow and first images appearing online, many think the sole glows in the dark. First in hand, turning the light off does make them look like they glow, but after putting them under a light for sometime and making the room pitch black, it is confirmed they do not glow in the dark.

The uppers on the Green Glow Air Jordan 4 are made of a very fine nubuck in dark grey while around the toe box uses cement grey (a bit lighter). Green glow makes the outsole, sole, inside of the tongue and on the lace loops pop. White and black accents the shoe nicely.

Official colorway for the Green Glow Jordan IV is Dark Grey/Green Glow-Cement Grey-Black. Retail is $160 and expected release date is August 17th 2013. You can buy a pair now at Sole-Up.com. For more releases, make sure to check out our Jordan Release Dates section. 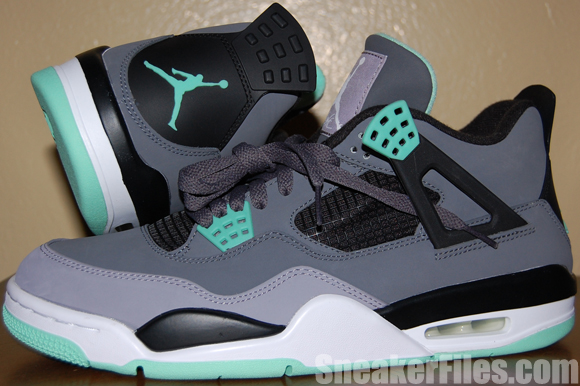