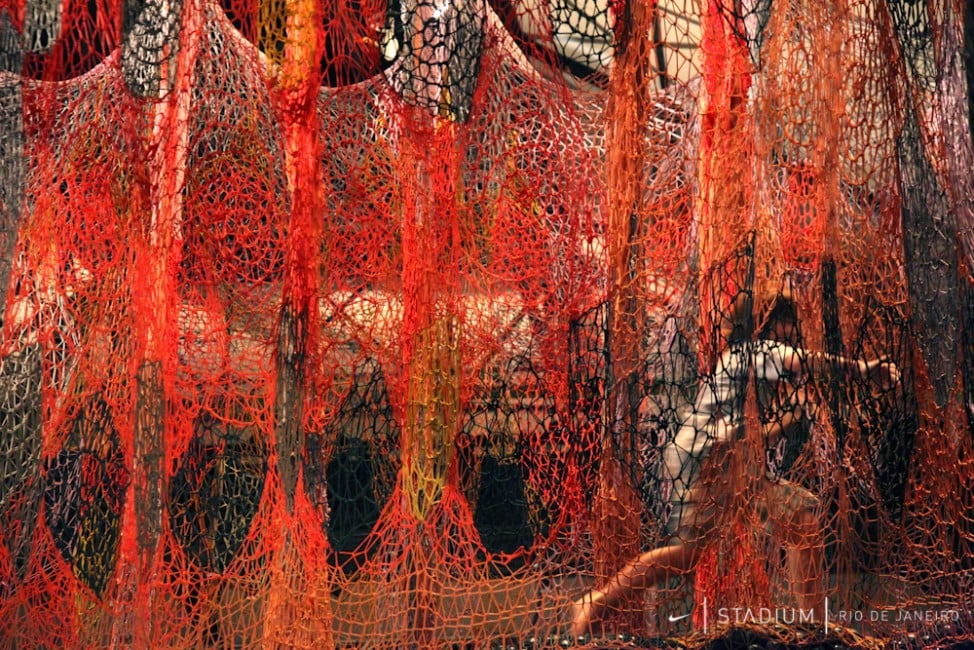 Nike Flyknit Collective landed in Rio de Janeiro after travelling through the main capitals of the world and occupied the old Leopoldina train station, in Rio de Janeiro downtown. Combining the concepts of Nike Flyknit, the exhibition featured the workObichoSusPensoNaPaisaGen, a sculpture in handmade crochet with 40 meters long and 12 meters wide, by carioca artist Ernesto Neto.

About 600 people occupied Leopoldina Station to take a look at the opening of Nike Flyknit Collective. The vernissage started at 6pm and continued with a party that lasted all night long. The music: good and tradicional brasilian popular music and latin rhythms. The typical carioca style was there with Globo snacks, mate (brasilian type of iced tea), northeastern grilled cheese, “churros”, hot dogs and very cold beer.

Upon entering the Leopoldina Station, the experience began into a sensory lounge that presented the history and benefits of the HTM Nike Flyknit. Then the guests interacted with the concepts of lightness, performance, formfitting and sustainability of Nike Flyknit, also present in the work of Ernesto Neto, which formed an immense maze twisted and suspended in the air. A big line was formed to explore and walk insideObichoSusPensoNaPaisaGen.

Originally designed for the Faena Art Center, in Buenos Aires, the piece premiered in Brazil at Nike Flyknit Collective. The artist Ernesto Neto celebrated the initiative and the occupation of Leopoldina station with sculpture:

“No place would be better than this and give such a lightness to the piece. It’s really cool in here. O Bicho is a sculpture where I try to make the connection between figure and background, is an organic work, a sculpture that swallows people. And it has to be less machine and more animal. Besides the movement issue. Leopoldina is a train station. The train has a path, so has this work. It involves the idea of collectivity, such as Nike Collective. For it to exist, many people have worked on this project,” he said.

It is a physical, visual and incredibly monumental experience:

“I’m delighted by its richness of textures and colors,” summarizes the artist Adriana Varejão.

“Both explore the possibilities of crochet. It’s a type of design that tackles principles and experiences related to movement and body. The place could not be better: a train station.“