HomeAir JordanWhat Would You Do : Keep The Money or Give It All...

What Would You Do : Keep The Money or Give It All Away? – The Story of Franaldo Hanna 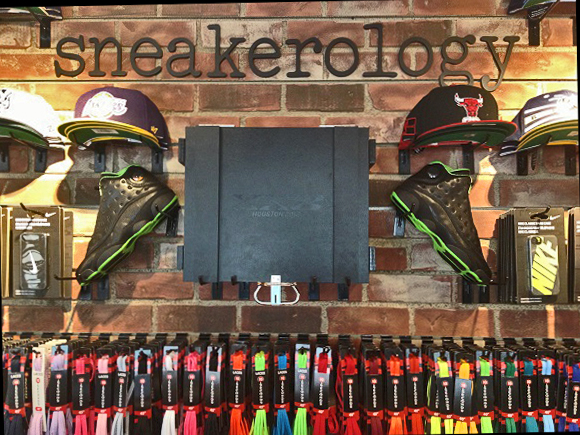 If you follow the sneaker news circuit, you’ve probably seen posts in regards to the winner of the Air Jordan XIII (13), from the “28 Days of Flight” month-long contest held in February, selling his pair on eBay. What you might not know about this story is the fact that the seller, Franaldo Hanna, a 27 year old cleaning technician for his family’s cleaning business, is donating every cent from his sale to St. Jude’s Children’s Hospital in Memphis, TN, one of the worldwide leaders in children’s cancer research. Oddly, some sneaker blogs/websites have chosen not to even mention this part of the story, which to me is much more newsworthy than any shoe could possibly be. I understand that we as sneaker writers are tasked with writing about, y’know, sneakers, but to not even mention the fact that this guy was willing to give every single dollar from the sale of this shoe away to charity was a travesty.

For those unfamiliar with the contest, the “28 Days of Flight” contest was held by Jordan Brand during the month of February, in the lead-up to the release of the Air Jordan XX8. Utilizing the black and green theme used for the Air Jordan XX8, Jordan Brand created a pair of each of the Air Jordan signature models, from 1 through 28, each crafted with high-quality materials and each a 1-of-1. Starting from February 1st, Jordan Brand held a daily contest for the model coinciding with the date, meaning that for February 1st, it was the Air Jordan I (1); February 2nd, the Air Jordan II (2); February 3rd, the Air Jordan III (3); etc. The contest consisted of sending in an original picture featuring the particular shoe of that day. One winner was picked for each day, with the winner receiving the special “28 Days of Flight” pair from that day, sent with a special wooden case for storing and displaying the shoes. Considering that there was only 1 pair of each model, and the fact that this shoe would most likely never be made again, you could imagine the craziness this contest caused. People were racking their brains in trying to come up with the winning picture for their favorite model of Air Jordan. With each pair featuring a striking black and fluorescent green colorway, reminiscent of the Air Jordan XIII (13) “Altitude”, along with high-quality materials, these shoes were truly works of art, and would be a welcome addition to most every sneaker aficionado’s collection.

Before hearing about this story, I remember having read about a winner of another one of the “28 Days of Flight” Air Jordans, this one being the Air Jordan XI (11), which was most likely the most desired shoe of the bunch. This seller was also selling his pair of shoes on eBay, with a starting price of $15,000. With this auction, however, there was no mention of donating the proceeds to a charity. I don’t say that to disparage the seller of that pair of shoes, either. I imagine that most people wouldn’t be willing to donate the money if they were in a similar position, and there is nothing wrong with that. However, the fact that most people wouldn’t do what this man did is what makes this story that much more exceptional.

After hearing about the contest from another sneaker site that shall remain nameless, Franaldo, a life-long sneakerhead, jumped at the chance to enter; the only problem was that he was currently staying in Harlem, NY, while his shoe collection was in East Hampton, NY. By the time he was able to get to his collection, the contest was already at day 13, which lowered his chances of winning significantly, since, according to Hanna, “roughly 90% of my Jordans are I through XIV”.

With little time to spare, he immediately started snapping pics, uploading a total of 3 pics for the 13th day/Air Jordan XIII (13). Ironically, the photo that would end up winning was his least favorite of the bunch. Still, the photo, an other-worldly shot depicting the Air Jordan XIII (13) “He Got Game” standing on what could easily be mistaken as Martian land, was an excellent pic, worthy of being the winning entry. “I drew inspiration from the first moon landing and how MJ’s game was not from this planet”, said Hanna, and the finished photo definitely reflects that.

After also entering pics on the 14th, 23rd, 24th, and 26th, all that was left to do was wait (with the thousands of other Air Jordan fans that entered the contest). Although he had never won any contest in his life, Franaldo regularly posted “kick pics” to Instagram, so snapping photos of some of his Js and tagging them with the appropriate keywords was a no-brainer. Still, there was a long way to go before he’d know if he won – 6 long weeks, to be exact.

Towards the end of March, Hanna got the message, from Jordan Brand’s official Instagram account, that every entrant was hoping and praying to receive:

“@Throwuponyaself, We’ve selected this photo as our winner of #AJ13 Day of #28DaysOfFlight!”

Initially thinking the message was a hoax, he decided to play along and replied with the required one-word response needed to confirm his win: “OK”. They then asked for his address, which he sent to the requested email address. At that point, Franaldo’s work was done; the only thing left to do was wait for his pair and figure out how he was going to spend the money he’d get from selling it – so long as he’d actually won.

A few weeks after that email, a large package was left on the porch outside of the home he shared with his family. Since he was not expecting any mail, having decided the whole thing was bogus weeks ago after not receiving a response to the last email he’d sent them (the one with his address included), he assumed the package was for someone else. After walking past it several times, curiosity finally got the best of him and he took the package inside. Seeing his name on the package, he tore it open, nearly fainting when he saw a Jumpman logo from inside of the box, peeking out at him.

Included in the package was a sample Air Jordan shoebox and a wood crate. “I opened the box and saw the empty JB shoebox and thought somebody (robbed) me before delivery”, said Hanna. However, once he opened the crate, those fears were assuaged. The shoes were really there, and he’d really won! Now he could finally celebrate his victory, and plan how he’d use the spoils from his win.

At least, that was the original plan. After giving it some thought, those plans changed: “To be honest, when I won, I told myself I’d cash out and buy a bunch of shoes that were (originally) out of my price range”, said Hanna, “but once I had the shoes in front of me, I was like ‘I’m never selling these!’.” He also realized that he would need a lot of space to store his newly-won shoes and, more specifically, the accompanying crate, space that he didn’t have.

Before long, Franaldo started seeing pairs from the contest appearing on eBay, and was “blown back by some of the (prices), especially $15,000” for one of the pairs. He laughed to himself after seeing some of the asking prices, having “never (expected to) see shoes selling for those prices, unless it was for charity”. But in a day and age where a $250 pair of sneakers routinely sells for $2000-plus (See: “Nike Air Yeezy 2”), those higher prices are becoming less unusual by the day.

Hanna was set in his desire to keep the “28 Days of Flight” Air Jordan XIII’s for his own collection, until one evening, when, while watching TV, a St. Jude’s Children’s Hospital began playing on his screen.

“I was moved”, said Hanna. “If those commercials never moved you, you’re lying or heartless… A light bulb went off; let me help them by selling my shoes” and giving them the profits.
Admittedly, there were a few times where Franaldo considered backing out, which is only natural for someone in the situation he was in, but the thought of his mother, one of the driving influences in his life, and the values she’d instilled in him is what pushed him to stay the course. Franaldo wanted to show the world that “it’s not all about self in the sneaker community”. To people on the outside of the culture looking in, it might be easy to see sneakerheads as self-absorbed, materialistic people that are only concerned about what shoes they’re wearing, and are willing to do whatever to get those shoes – even robbing and, in the worst cases, killing people. It’s easy to miss the good parts of the culture, especially when the only things covered and reported on are the negative things.

As mentioned earlier, most sneaker-centric websites chose not to report the charitable side of this story, instead focusing only on the shoes and how much money they’re likely to make. Why didn’t they mention it? Is it because we’ve been conditioned to believe that this facet of the story isn’t “newsworthy”? But regardless of why, only we can make the change on what we chose to cover. To this writer, the true story is Franaldo and his decision to put aside his needs and help others instead with the money made from the sale of his XIII’s.

If you were in his situation, would you have the courage and strength to sell your pair and donate the profits to a charity? Or would you take the easy road, doing what feels comfortable and makes you feel good? We can’t all donate thousands of dollars to charity, but what we can do is stand up and do the right thing whenever we have the opportunity, and try to help each other instead of worrying only about self. We at SneakerFiles.com commend you, Franaldo Hanna, and thank you for giving us the chance to cover your truly amazing story.

For those interested in seeing this amazing, one-of-a-kind pair of kicks, they will be available for your viewing pleasure at Sneakerology in East Hampton, Long Island, NY, for the duration of the auction. Franaldo views sneakers as “…art and a way of expression”, so for those of you who’d like to view these pieces of art, swing through while you can! The eBay auction can be viewed here. 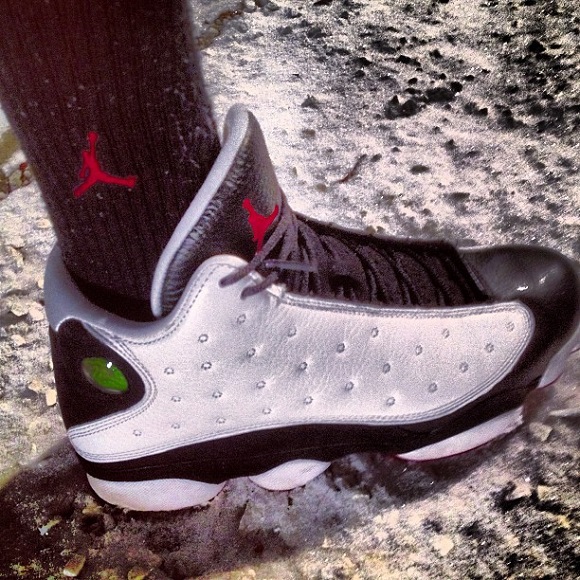 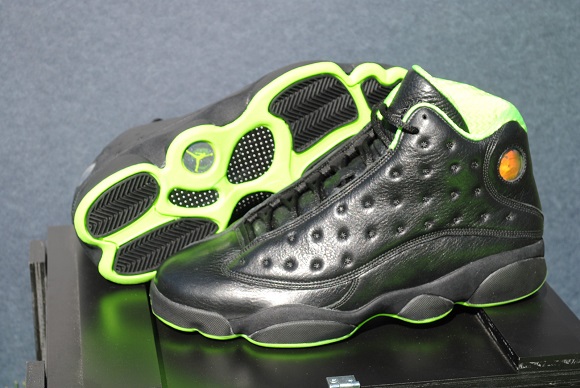 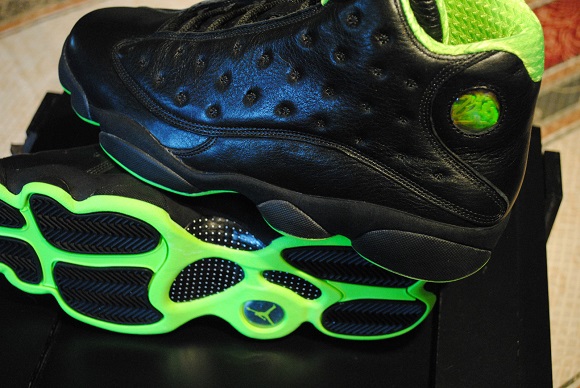 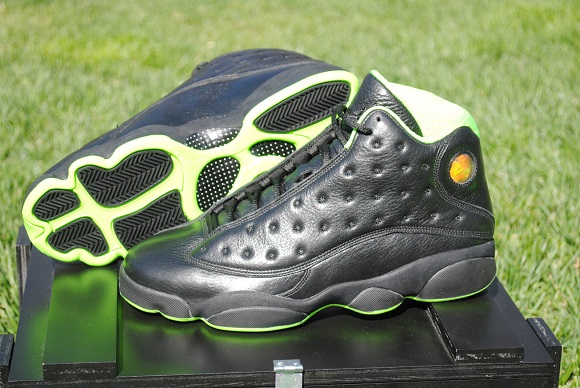 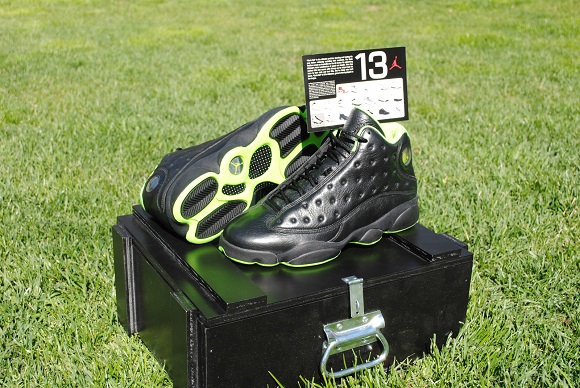 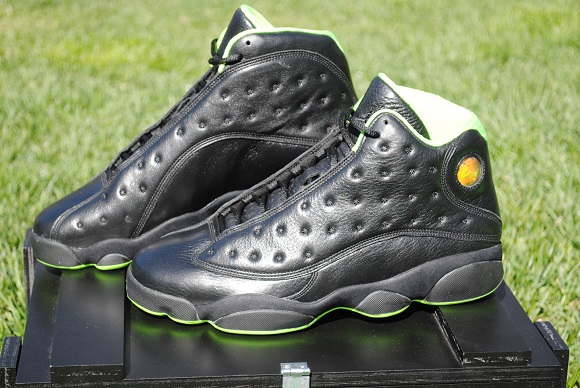 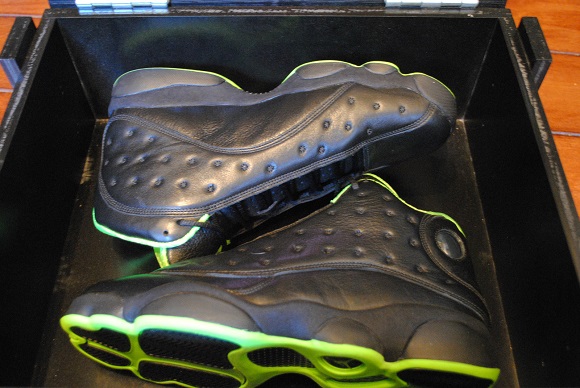 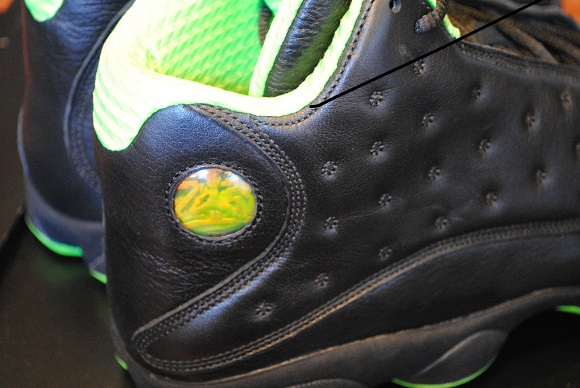