2012 will bring back a favorite to many Jordan-heads, the Air Jordan 7 Dark Charcoal aka Raptor.

The Charcoal Air Jordan VII originally released in 1992, then in 2002 a Charcoal version known as the Raptor Jordan 7 released. Following suit, 10 years after the 2002 retro we have the 2012 which is on point to the original.

The 2012 Air Jordan Dark Charcoal features a black nubuck upper, red and purple along the midsole with other red accents throughout, grey and dark charcoal on the tongue, black insole with a red Jumpman logo, purple heel tab and red 23 placed beneath, and a mixture of purple, black, red and orange shade on the sole.

Expected release date for the Charcoal Air Jordan 7 2012 is September 1st 2012, with the official colorway being Black/True Red-Dark Charcoal-Club Purple. Retail is $160. You can pick a pair up now at KickSole.com.

Make sure to bookmark our Air Jordan Release Dates page. 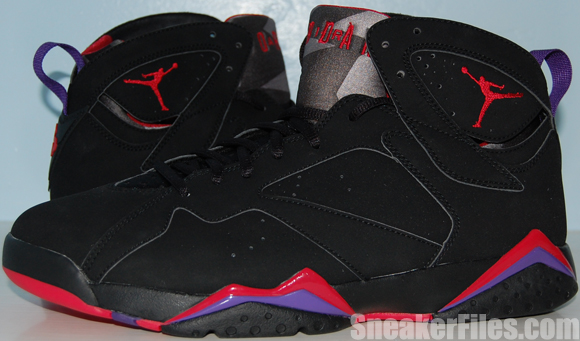