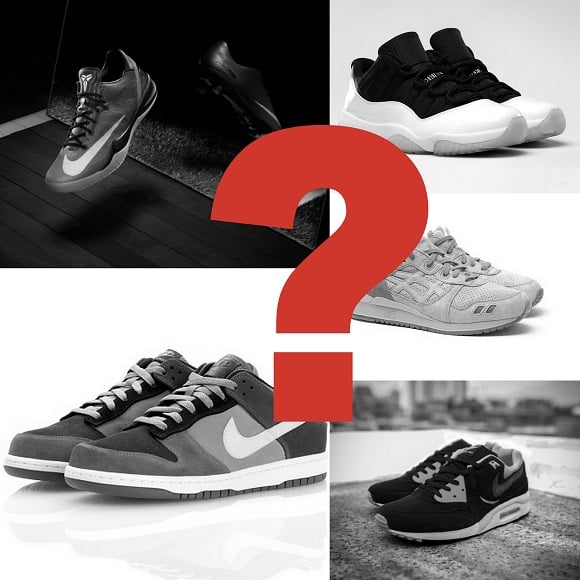 Originally titled the “Top 5 Sneaker Releases of the Week”, I decided to go with something a little more creative, which leads us to this week’s edition of the Top 5, now known as “The Official Unofficial Top 5 Kicks of The Week”. Join me on this magical recap, and tune in every week to hear back from your homie Chris, over here at one of the Godfathers of this thing we call the sneaker news circuit, SneakerFiles.com.

Now that we’ve gotten that out of the way, here’s what you came for: The Top 5 releases of the week. Bear in mind that while I am an official member of the Sneaker Files staff, this is an unofficial account of the offical Top 5 Releases. Yeah, that confused me too.

This week was another strong showing from the Swoosh Squad, filling up 4 of the Top 5 spots, either via the figurehead, Nike, or via Jordan Brand, a heavy hitter in their own right, and a brand largely responsible for Nike’s top spot in the sneaker food chain. Asics sneaks in with a dope collaboration with a Chicago boutique. Let’s get it started… 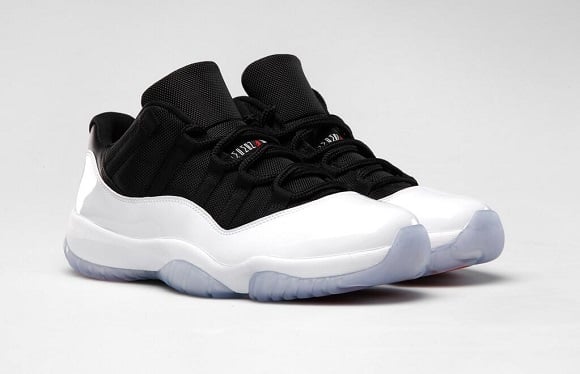 Starting off the countdown is the Air Jordan XI Retro Low “White/Black/True Red”, sometimes known as the “Reverse Concord”. Going the route of the “Patent Leather Low” XI instead of the original XI Low – which featured elephant print instead of patent leather in a bizarre cutout on the upper – this XI definitely captured the qualities that made the original Air Jordan XI such a hit. Mesh detailing on the upper, combined with the signature ring of patent leather, gives the shoe that “modern-yet-old school” look, somehow managing to look like a dress shoe and a basketball shoe at the same time. That look is taken a step further with the Black/White upper, which brings to mind a tux. If you were anything like me, your childhood dream was to get married in a pair of Concord XIs, and these would fit the bill just fine. A dope release, for sure, but not enough to crack the Top 4. Speaking of “4”, this next shoe had me waiting 4-ever (4 nothing)… 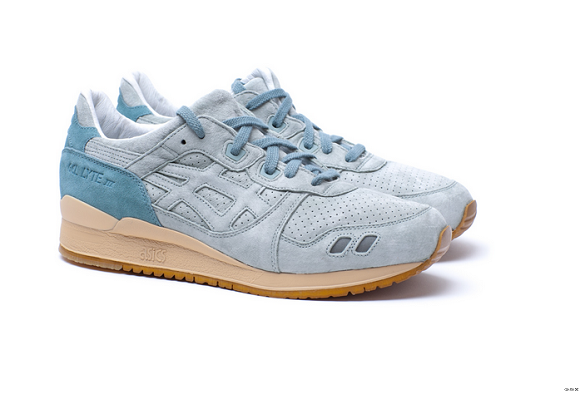 Now, this one was a shoe that gave me some problems, as I had trouble deciding if this shoe deserved to be higher on the list. For now, no, but I’m sure I’ll change my mind a minute after I publish this piece. I like to call this joint the “Lakefront”; why? Because the baby blue and tan upper was inspired by Chicago’s lakefront, of course! St. Alfreds, a small boutique out of the Chi, really knocked it out of Wrigley Field with this one, utilizing the same “premium materials/dope colorway” formula that a certain sneaker king/clothier from NY perfected. As the shoe hasn’t yet released as of this writing, only time will tell how much the Ronnie Fieg hype-train will affect this release; let’s hope not much, otherwise we’re all in for a tough cop. If you do strike out, fear not; the shoes are set for a wide release next week at a grip of retailers, so you should be able to secure a pair for retail, so long as you’re on your P’s and Q’s when the shoes release.

UPDATE: After today’s online fiasco, the shoes didn’t release online as planned, but since they did drop in-store at their Chicago location, they qualified for the spot, so I kept ’em. Back to your normally scheduled program. 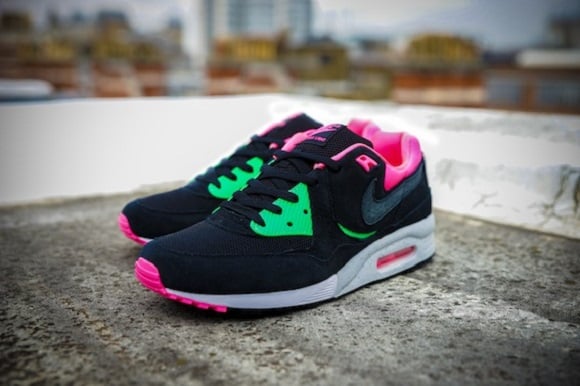 In the middle spot, we have one of the pairs from Part 1 of the just-released Nike “Urban Safari” pack from UK sneaker spot/collab master size?, which pays homage to two of the most revered shoes in the Nike ACG Pantheon, the Nike Air Mowabb and Lava High. The pair I’ve chosen is the Black/Poison/Pink Air Max Light, a shoe surely to remind some of the Air Yeezy 2, since it features black, pink, and bright green. Fortunately, the shoe is not an Air Max 1, as it would create a name conundrum with the Nike Air Max 1 FB, which is already (sadly) known as the “Yeezy”. With this shoe being an Air Max Light, calling it “Yeezy” is just fine, name-wise at least; as a part of the sneaker community, it’s still painfully annoying.

Can a shoe ever feature black, hot pink, and bright green and not be dubbed “Yeezy”? Seriously, it’s getting out of hand here, and I don’t know how much more of this I can take. I liked these shoes simply because I liked the colors and love the Air Max Light (what really should be called the Air Max 2, btw), but this “Yeezy” nonsense is really dampening that appreciation. Although, getting caught up in the nonsense of the hype-mongers is a personal choice, meaning we don’t have to pay attention to the “Yeezy” BS if we choose not to. I need to take my own advice on this one, or I might lose it… 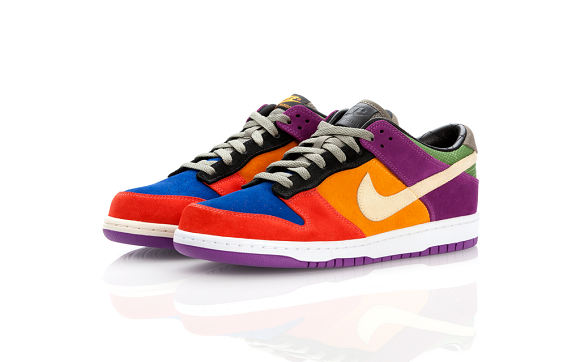 At Number 2 is a blast from the not-so-distant past, the Nike Dunk Low Retro “Viotech”, one of the loudest – and frutiest (no homophobic “No Homo” comment) pairs of Nike’s we’ve seen thus far. For those of you youngins out there that were in Pampers when the clock struck Midnight on January 1st, 2002, the Nike Dunk Low “Viotech” originally released in late 2001 as a Japan-only release, much to the chagrin of sneakerheads everywhere. The shoe takes the words “color-blocking” to a whole new level, utilizing damn near every color featured in the Lucky Charms Leprechaun’s ride to his pot of gold (aka a rainbow, for you carb-watchers out there who’ve never seen the inside of a cereal bowl). And like that cereal, these shoes are awesome.

The retro version of the modern classic is nearly identical to the 2001 pair, with a few key differences. The main thing that separates the two releases is the use of premium leather on the Nike logo on the tongue, as well as in the lining of the shoe. Also different is something not initially visible: the addition of a Zoom Air unit to the insole, adding additional comfort to the colorful kicks.

A very hard decision it was, me laddy, deciding between ye favorite colorful kick and another bright creation, one which reminds me of me pointy boot…

(Ok, I’ll stop now. That was my attempt at pretending to be the Lucky Charms’ Leprechaun. And yes, it sucked.) 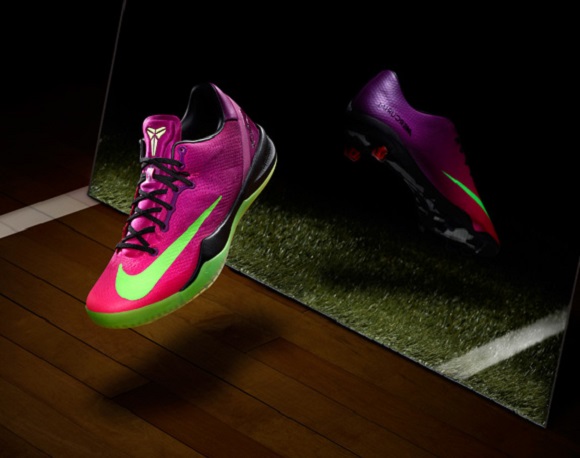 Taking the Number One spot this week, and (the Unofficial) Official Champion of the Top 5 of The Week, we have the Nike Kobe System 8 “Mambacurial”! (Cue parade music, streamers, confetti, and cheers).

Having grown up in Italy, like most every European boy, Kobe loved soccer at an early age. Ever since the Kobe Zoom VI “FC Barcelona” pack, Kobe has expressed that love on 2 pairs of kicks in every series, usually by having Nike drape his signature shoe in the colorways of his favorite team, FC Barcelona. Well, Nike took the “soccer” theme in a whole new direction this time around, taking inspiration from an actual Nike soccer boot.

The shoe takes its design cues from the Nike Mercurial Vapor IX soccer boot, featuring the large Swoosh on the lateral toe area and the word “Nike” emblazoned on the medial side of the shoe, just like its futbol-loving cousin. While the Kobe series has started to take on a more European design aesthetic as of late, this takes things to another level, by taking the actual features from a specific Nike soccer shoe and throwing it on one of his signature models. When looking at the Mercurial Vapor IX, which utilizes the same red plum/electic green/pink flash colorway, that inspiration isn’t just apparent; it kicks you in the face like a soccer punt.

As this isn’t an “FC Barcelona” tribute, per se, could we possibly see a Kobe System 8 “FC Barcelona” pack in the near future? Who knows, friend? I can promise you this, however; if Nike and Kobe do decide to go in that direction, you can be sure we will let you know immediately, so keep it locked with Sneaker Files for all your sneaker news needs!

What did you think about this week’s Top 5? Agree? Think I’m a hack and wish I lost my fingers like Chuckie from my new favorite show, Sons of Anarchy, preventing me from ever typing another piece again (quick enough to meet a deadline, at least)? I accept that. But still, let me know in the comments below, and tell us what your Top 5 looks like this week! And please, tune in next week for a look at who will make it to Number One!