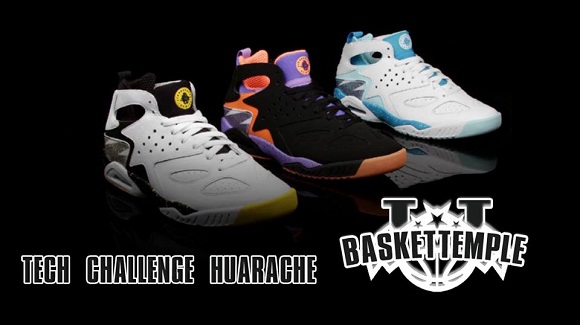 When news of Andre Agassi rejoining the Nike ranks hit recently, sneakerheads the world over salivated with the thoughts of possible re-releases of some of Agassi’s signature shoes. Well, it looks like we might be getting what we asked for, starting with the Air Tech Challenge Huarache Retro.

According to French website Baskettemple, we can expect these in 2014, in what will hopefully be the beginning of a series of signature Agassi Retros (Air Tech Challenge II (2), anyone???). In the above pic, it looks like the release will include 3 different colorways, 1 OG (the White/Black/Bright Goldenrod version in the forefront) and 2 new CWs, one featuring a Black/Orange/Purple colorway reminiscent of the colors seen on the early-90’s Phoenix Suns’ jerseys, and the other featuring a White/Light Blue/Grey colorway with a feel similar to the “French Blue” Air Jordan VII (7). All of the colorways are reminiscent of the 90s, which is appropriate, considering the Air Tech Challenge Huarache originally released in 1992. While the “Goldenrod” colorway version was an OG colorway, the Retro isn’t an exact version of the original, as the midsole is slightly different on the newest iteration. Either way, these shoes definitely capture the essence of the original, and will be highly-anticipated by fans of all things 90’s and sneakerheads alike.

Will you be copping a pair of these when they release? Hoping to see another Andre Agassi signature sneaker retro instead? Let us know in the comments below, and stay tuned for any updates on this upcoming release.