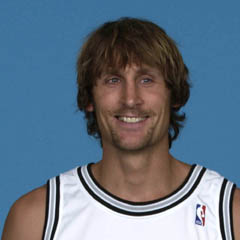 Own the footwear of this legend today!

A 2007 Reebok Basketball advertisement proclaimed, “Different Question, Same ANSWER.” The conspicuous slogan was implemented in an embargo for the Question III, the latest from Allen Iverson’s other line. The shoe proved to be a generally unassuming ride, with RBK’s Hexalite cushioning interface placed in the heel and forefoot, a magnetic midfoot strap for added sturdiness up top, and circular TPU inserts integrated into the upper for added ventilation. Team Reebok ballplayer and San Antonio Spurs forward Brent Barry wore the shoe sparingly in ’07, but when he did, he sported the model in a unique white/black colorway to perfectly match his home uniform. Barry’s version is enhanced by “Team” (I’m dissapointed–where’s his “Bones” moniker?) inscribed along the heel, but otherwise, there’s nothing that differs between these and the general release version. Even so, you can cop them on eBay here.