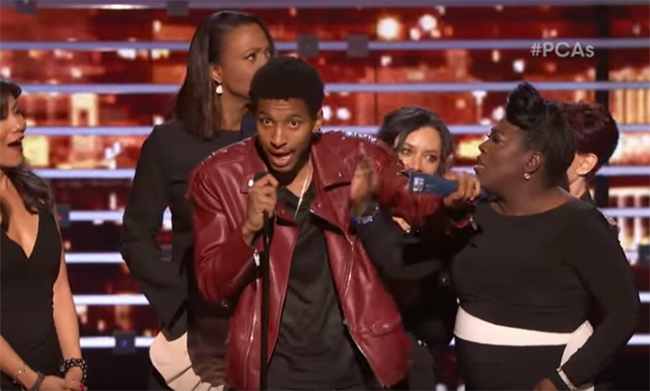 If you haven’t heard Kanye West’s latest track ‘Facts‘ which takes a stab at Nike, then more than likely you have been disconnected from the net. Taking the song to heart, a stage crasher interrupted the People’s Choice Awards to let everyone know how he feels with the whole Kanye West versus Nike beef.

Zacari Nicasio was the individual who took the People’s Choice Awards stage by storm while interrupting CBS’ “The Talk” hosts speech. First he gave a shot out to Kevin Gates and promoting his upcoming album while then following up “Yeezy jumped over the Jumpman, yessir!”. Right away he pretty much just walked off the stage, but left a few of the hosts a bit upset.

Below you can watch the short 36 second clip of Zacari Nicasio bombarding the stage. If anything, this helped plug Kevin Gates “Islah”, other than that sides seem to have already been chosen for either Kanye West or Nike/Jordan Brand.