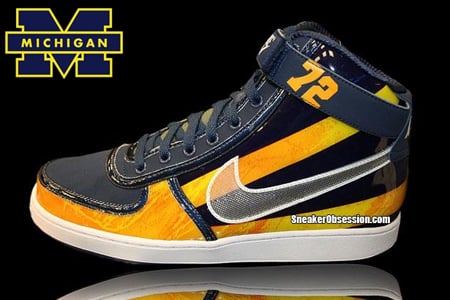 As part of the Nike college football helmet pack, Nike is releasing the Vandal in Michigan Wolverines colors: azure blue and maize. Nike made this special pair of Vandals to celebrate Michigan’s spot in the NCAA Big Ten. The shoe features a mainly maize and blue stripe pattern patent leather upper, with a white translucent patent swoosh, azure blue nubuck toebox, a white midsole, and azure blue sole. Also, the shoe has blue patent lining on the stitching, and a yellow print of ’72 on the blue velcro strap, with a white Nike trademark sign in the middle of the strap. These are set to drop later this year.