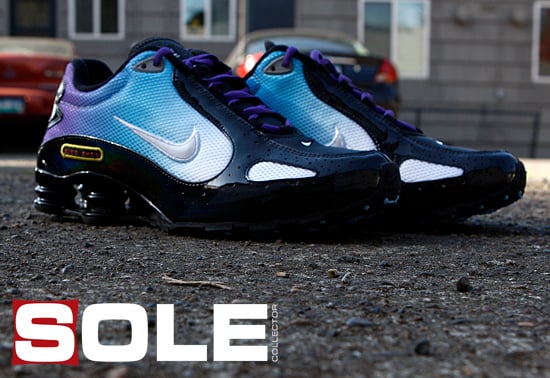 The Swoosh’s uber-limited Playstation Air Force 1 was highly sought after upon its release a few years ago. With it’s purple/ice blue/sky blue/white gradient color combination and tasteful Sony branding, the product was unlike anything ever released before. (And to this day, the shoe fetches upwards of $2000 on the ‘Bay.)

The folks in Beaverton grew hip to the “PS1” tones, and applied them to the Nike Shox Monster, a popular model in Nike’s dynamic running division. The shoe is characterized by a black patent rand overlay that rides from the toebox to the heel. But more importantly, the Monster mimicks the PS1 AF1 colorway, as it indeed features the purple/ice blue/sky blue/white combination. I think the Monsters are a horrible shoe, but the calculated gradient toning just makes them sick! Check back here soon for updates, as the Play Sation-inspired Shox will be available at Footlocker sometime in November! Via Sole Collector.