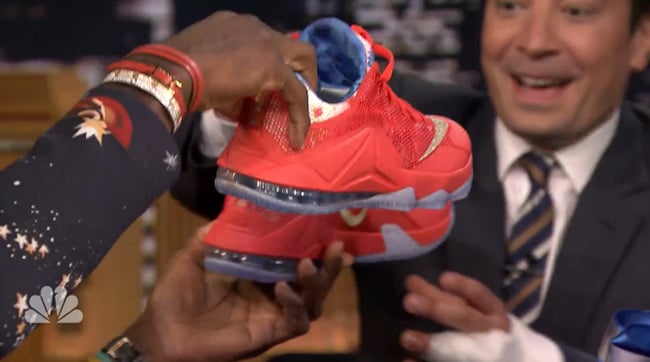 LeBron James appeared on ‘The Tonight Show’ with Jimmy Fallon to promote his upcoming movie ‘Trainwreck’. Presented to Fallon was a special pair of Nike LeBron 12 Low Trainwreck.

LeBron already had on the Trainwreck PE’s before giving a specially wrapped box with the shoes inside to Fallon. He then wasted no time to lace them up. The two also played a game of Faceketball. Each had a basketball hoop around their heads and the first one to three wins.

The segment was pretty cool to watch but we doubt that the ‘Trainwreck’ Nike LeBron 12 Low will actually release. Do you think Nike should launch a small run of these for the debut of the movie? Check out a short clip below and let us know what you think.

ABOUT US
Sneaker Files is an online sneaker magazine which highlights the latest updates on Air Jordan, Nike, adidas and more.
Contact us: [email protected]m
FOLLOW US
© Sneaker Files