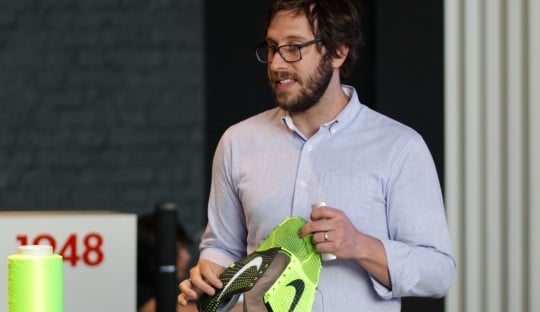 After a look back at day 1, Nike Stadiums has a full recap of the week-long “Performance” workshop as a part of the Nike Flyknit Collective at 1948 London.

This week was the fourth and final Flyknit Workshop at 1948.

Centred around the Flyknit benefit of “PERFORMANCE”, the workshop was hosted by United Visual Artists, who were joined by Nike’s Studio Director of the Innovator Kitchen Ben Shaffer, along with local creative performers: choreographer Ella Robson, gymnast Michael Standen and 1948 sports club Yogaflex teacher, Colleen Meier.

Participants spent a week with the innovators working on understanding the Flyknit benefit of Performance and expressing it as a personal performance – a choreographed sequence of movements on UVA’s trampolines. Working on the theme of the human body and body performance, they had the privilege of testing and tweaking the light and sound for UVA’s final art installation.

After an introduction to the Flyknit Innovation from Ben Shaffer on the first day of the workshop, participants were set up on Nike Fuelband and encourage to monitor their personal performance via NikeFuel. The group exchanged thoughts and ideas with the innovators about the benefits of Nike Flyknit in a think tank discussion with a particular emphasis on performance, and its application to both creative and sporting endeavours.

Matt Clarke of UVA said: “We started out creating traditional light performance for shows. Over the years we’ve tried to mix up how we experience performance by allowing the audience to perform, too. We’re interested in the grey areas that merge the two.”   Designing shoes at Nike is, as Shaffer points out, all about pushing performance. “The collaboration side of things is extremely important within Nike, and essential in enabling us to consider performance in an entirely different way. We work with athletes including Paula Radcliffe and Abdi Abdirahman to help them to deliver their best performance. We’re also inspired by what you deliver, and we hope that Flyknit can inspire you.”

The second day was dedicated to sports and research. The participants began with a talk by Alexandros Tsolakis, a senior designer from UVA, on what performance means to UVA’s practice in digital art. Alexandro introduced the Aske Gardens art installation and gave the group a brief “to create body movements on the trampolines that will help us to get the best performance out of the art piece.”

The participants were then taken on a behind-the-scenes visit to a performance rehearsal at Exhibition Road, South London by Ella Robson. Ella encouraged the group to think about the feeling they want to convey with their personal performance. They then came back to 1948 and did a yoga session with 1948′s own Yogaflex sports club leader, Colleen Meier. “Think about how your balance and positioning in Ashtanga Yoga and extend that to your performance on the trampolines”, Colleen told the group.   “Yoga is about breathing and being in the here and now, all of which helps you to focus on performance.”

The following two days were about putting their research of the different means of performance into practice. How does your body movement affect perception? What does it mean to perform digitally? How can performance be individual and collaborative? How does your movement affect UVA’s art installation and what can we do to make it more performative? The group considered the answers to all these questions and then began working with Ella Robson to choreograph short piece on the UVA trampolines.

The insights provided by the innovators proved crucial to the participants’ final sequences – and the participants’ sequences in turn informed the final preparations for the launch of UVA’s installation at Aske Gardens. “The three trampolines act as one instrument. I need to learn how to play this instrument – and I need you to help me” said choreographer Ella at the start of the week. By Friday, she had gained some invaluable insights for her own choreography: ”I’m really impressed with the work they’ve done this week – I think they’ve really explored the technology and it’s given me such a brilliant idea of what I can do with it.” This sentiment was echoed by UVA’s Tieman Rapati: “The group have really embraced the technology and explored its full capacities, which has been rewarding to watch and also so valuable to us at UVA.”

After the all the physical training and testing activity of the trampolining, Friday was a day for showcasing their pieces. The students took to the interactive trampolines one last time to perform their final sequences in front of the class. Having had their pieces both videoed and photographed, each group member was able to take home their best shot, printed and framed.

Later in the evening, the Performance students returned to 1948 to celebrate their achievements alongside all the participants from previous workshops. Together, they celebrated the culmination of an amazing month of creativity and sports – all inspired by benefits of the Nike Flyknit technology. 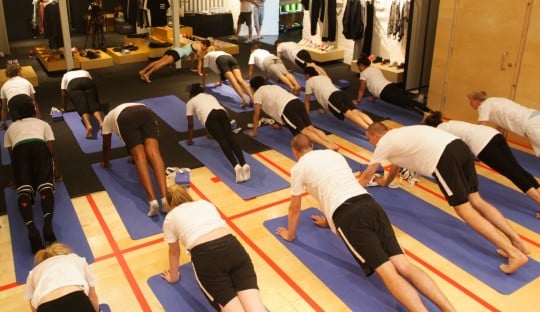 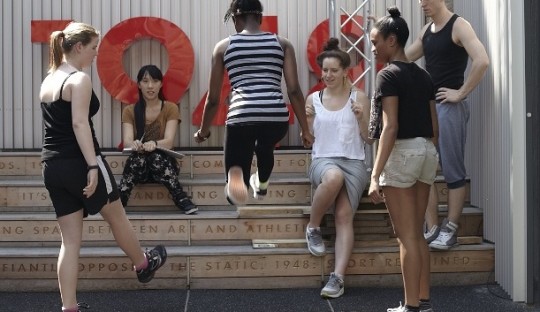 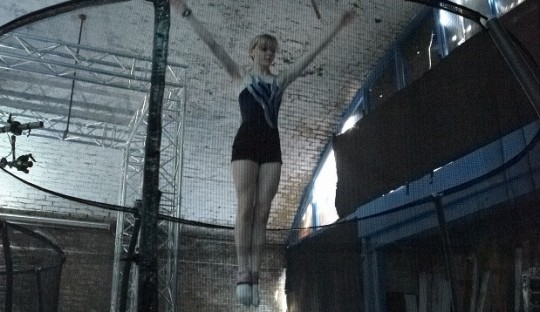