Nike loves its some denim, so naturally, they released the Nike Blazer Mid with a Selvedge Denim Mid. The shoe features different washes of selvedge on the upper accented by a white toecap and black midsole and Swoosh. Colored stitching holds it all together and a “NIKE” tag is affixed to the heel. The Nike Blazer Mid Selvedge is available now in Japan but should hit here in the Sates later in the Summer. 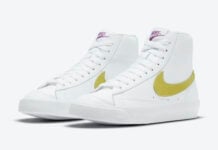 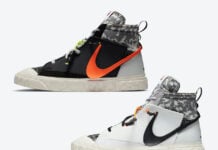