By Brian Betschart
May 6, 2013
In
NikeNike Retro 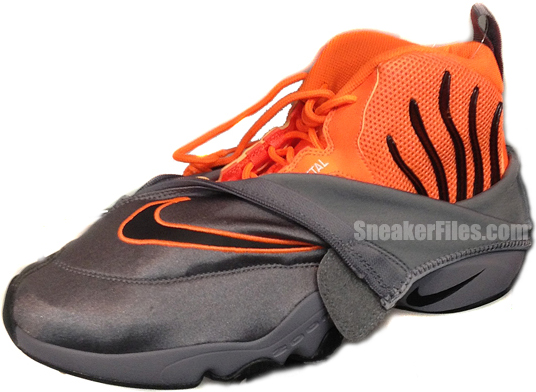 We have a first look at a Grey and Orange Nike Air Zoom Flight 98 The Glove 2013 retro inspired by Gary Payton’s playing days at OSU (Oregon State University) scheduled to release later this year.

The Nike Zoom Flight 98 ‘The Glove’ was made popular by Bay-Area native Gary Payton during his playing days for the Seattle Supersonics. With his speed on the court, sleep design and the availability to leave them zipped or or down, Nike had a hit in 1996.

For the 2013 Zoom Flight 98 shown, the shoes features a grey base with a metallic like finish, black accents including the Nike Swoosh with orange stitching around it. Zipped down bright orange glistens on the sides and laces.

As of now, a release date has not been set but we should see The Glove Nike Air Zoom Flight 98 Grey/Orange drop Fall 2013.