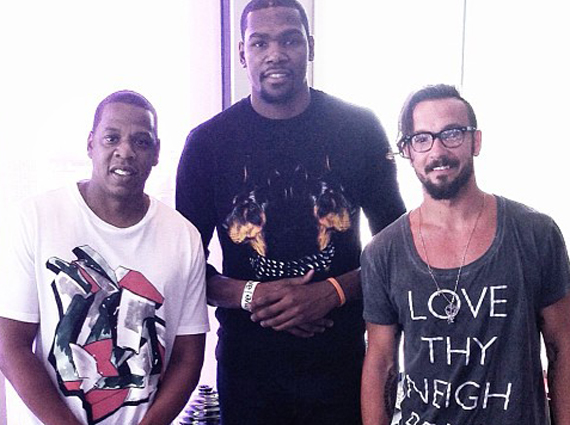 Jay-Z has already left an indelible mark of the world of Hip Hop. From countless platinum plaques to to an endless catalog of hits, the one they call Hov from Marcy Projects in BK is a true business man who is way ahead of his time these days. While is still much involved with the world of rap, the Jigga Man has set his eyes on taking over the world of sports by way of his Roc Nation Sports agency.

Since its initial opening, the agency has already managed to sign a list of notable pro athletes that includes Victor Cruz, Robinson Cano, Geno Smith, and the WNBA’s latest basketball star Skylar Diggins. Though the list is rather impressive for a rookie agency, Roc Nation just landed another huge acquisition. That latest signee being OKC Thunder star, Kevin Durant. With this latest signing comes an endless number of questions mainly in regards to what this move means for Durants brand. Alining yourself with one of the most strategic businessmen in the world could most assuredly lead to some big bucks for Durant. With the arrival of the Nike KD VI about two weeks away, could this latest business move push KD’s signature kicks to a whole new level? Could this move have also opened the flood gates for more high profile NBA stars to join the Roc Nation team as well?

Guess we will all have to be as patient as possible to see what happens next as moves are apparently being made in major ways. Keep reading after the jump to check out some pics of Jay-Z and his latest client and be sure to let us know how you feel about this move. 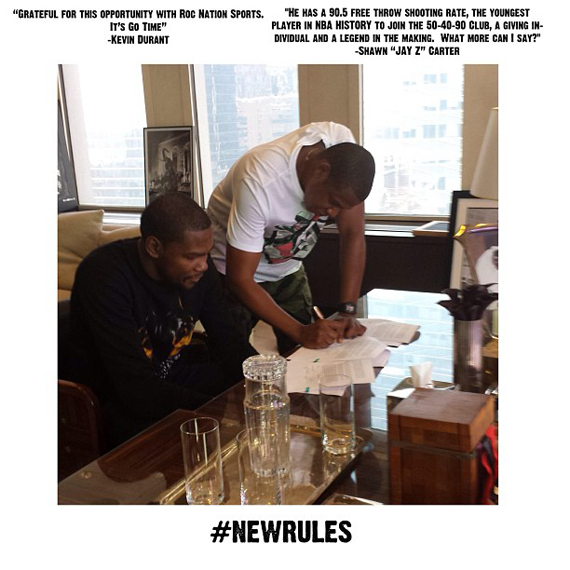