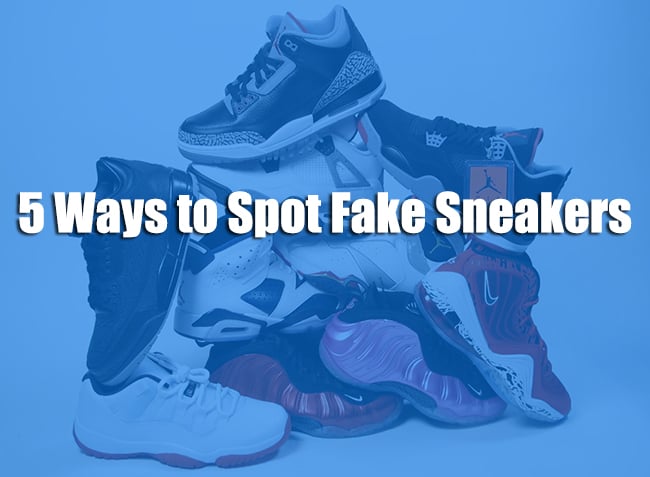 Buying authentic sneakers online or in person could be one of the hardest achievements. Not every pair we can get at Nike Store, Finish Line or the other big chains. Sometimes we have to look through listings on eBay, try FaceBook groups, message boards or even Craigslist. Some will try to pass fake sneakers off as real or the person just doesn’t know, but in the end we want to be safe. To help assist you in your next pick-up we put this guide together with 5 Ways to Spot Fake Sneakers.

The Box is Off

One of the key indicators even before looking at the shoes is the box. For older retros that came with the Jordan Face with lines, usually the colors were lighter and even the spacing was off. But now we have the new Jordan Box which is black and gold, a bit easier to mimic. Most of the time the boxes that hold the fake shoes will be all beat up or ripped. Even the cardboard used to create the box seems thinner and cheap which is probably why they always come destroyed. But what if you are purchasing from a careless sneakerhead that didn’t take care of the box and the shoes could be real, what do you do?

Good part in this there is still a way to find out if the shoes are fake by the box and that’s investigating the box tag. For this example we will use the Nike Air Yeezy 2 ‘Solar Red’ box.

The fake is the size 10 and authentic is a 10.5. First thing you may notice is the spacing of ‘Air Yeezy 2 NRG’ on the tag. The fake model is spaced farther apart than the authentic. The 1 in size 10 also dips more than the authentic. Furthermore the actual font is larger on the replicas. Also check out on the real box, there is the Suggested Retail Price attached, where the fakes don’t have them. Now it’s possible for someone to rip them off, but you will notice how clean the side of the sticker is which should have some sign of the tag being detached.

There are other ways to tell if the sneaker box is fake. Some examples are if the product number is incorrect, misspelling of words, coloring is off or even the label is placed incorrectly, like centered or crooked.

Nike – Jordan Never Made that Colorway

This can be used for any brand, but the countless amount of fake Nike’s and Air Jordan’s floating around makes for a good example. You may have seen people wearing ‘Spongebob’ Jordan Dub Zeros or even See Through Air Jordan’s. Or how about this, the Air Jordan High Heels. Hate to burst your burble but those are fakes. We don’t want to get into the countless amount of Air Yeezy’s that were produced in 1,000s different color schemes, but you get our point.

Now let’s say that you don’t know the history like diehard sneakerheads and maybe you’re just getting into collecting or you want to make sure your latest purchase is authentic. Maybe the pair you are about to buy isn’t something out of the norm for JB. You could search through the various informational websites on sneakers, which will take some time but can save you on getting burned. We do have an Air Jordan History section which you can browse through to see if the colors match up with an already released pair. No matter what you do, this will take some time but in the end you can learn some things and save some dollars.

Another helpful tip would be to take images of the shoes and post them either on a message board or even the many Facebook groups dedicated to sneakers. People are eager to help in most cases and won’t bite your head off for asking.

Let’s say you found a website and are ready to purchase your pair. Let’s also say this pair is the Nike Air Yeezy 2 ‘Red October’. When released online at NikeStore.com, the shoes sold out within a minute, literally and to top it off, not a lot of models were produced.

Now you’re sitting at this website and know you are a size 10, but you notice that not only do they have your size available but an 8, 8.5, 9, 9.5 all the way up to 12. This is a big indicator that the shoes are replicas. As you will notice from the image below, most of these fake websites have a size run from 8 through 13 with most half sizing available. These are what’s called “money sizes”, or in other terms the popular sizes. A size 9 will move faster than a size 7 which leads to quick sales.

The Shape and Material is Off

This step might need some training. Nowadays there are early released models that some say are fake while others say are B-Grades which are factory flaws that won’t pass inspection. With technology getting better, fakes are being passed off as the real thing and can go undetected from the untrained eye. With that being said, there are some ways you can tell if your shoes are real and in this example we will use the Air Jordan 13.

Now this is for the Jordan 13s, so if the shoes fall outside of this here are some steps that can help.

Side by Side: Take one pair from each shoe and stand them side by side. If both pairs are the same size, does one sit higher than the other? Is one a lot wider? Does the cut drop lower on one pair? These are good signs that you could have a pair of fakes on your hands.

Stitching: Compare the stitching between the two. In some fakes the stitching can be flawed and even coming out. Also the design of the stitch can be an indicator if they are authentic or replicas.

Different Use of Materials: Should this pair have tumbled leather but instead is something different? Maybe patent leather should be in place but the shoes in question has something that appears to resemble patent leather. Like mentioned, fakes tend to cut corners to save money and for a higher profit.

Look at the Smaller Details: No detail is too small. Check placement of logos, are they crooked? How about any other unique placement, like lets say Michael Jordan’s number, is that off?

Check Out the Soles: Different colored translucent sole could be a good sign (don’t get this mistaken for yellowing). If the shoes come with carbon fiber, make sure it’s the right design and texture.

What’s That Smell?: This is a bit odd but if you smell the shoes, they could be different. Since fakes are made with poor materials the smell test could be a good indicator.

The Price is too Good to be True

Who doesn’t love a good price? We sure do. But at times something can be too good to be true. Personally I have learned this the hard way. In 2004 I did a deal for three pairs of Air Jordan’s knowing they were worth more than the $300 I was paying, a lot more. Needless to say I paid the seller and never received what I paid for but the good part is my credit card company covered me. This of course wasn’t a website, but an individual seller, so chances are if you buy shoes from a website, they will come either real or fake.

We will use the Nike Air Foamposite One ‘Galaxy’ for this example and the website Aliexpress.com which has a ton of fakes, we would suggest staying away from regardless. The real model that actually launched at authorized Nike retailers sold for $220. The fake pair shown in the example below is being sold for $56.80, a significant difference. Sometimes these fake websites will have a slash through the price which implies you are getting some fantastic deal, when in reality you’re getting cheap shoes that will fall apart. This is a strategic method by them to make you think you’re getting a deal and possibly buy on impulse.

In the case you don’t know what the going rate is for a particular shoe, the best way to learn if you are potentially buying counterfeits is by gauging the market. FlightClub.com only sells authentic sneakers and you can see what they are going for, however they are priced higher than the going market due to the fact you know what you’re getting is real and in a timely manner.

The second choice and probably the best is eBay. Yes we know that eBay still has fake sneakers floating around but here is what you can do to help avoid them. Find out the sneakers make and nickname, in this case it’s the Nike Foamposite One Galaxy, then find the product number; 521286-800. Put those into eBay and you can see the aftermarket value is a lot higher than $56.80.

Now we aren’t saying you can’t find deals on real sneakers, they are all over the place even for aftermarket sneakers. Prices can range depending on condition they are in, the actual size or even if they don’t come with a box. After doing some investigating, use your best judgement.

Bonus: Check the Tag Inside the Shoes

We have one last step for you, check the tag that’s placed inside of the shoes, usually it’s on the tongue or side liner. Kind of like the box tag, is the product numbers the same? How about the font used? What’s different about the tag inside the sneaker compared to the box is you can find out when the production run was and the country they were made in. Let’s say you’re buying a shoe from 2013 but the tag shows it was produced in 2015, this is a clear sign they are fake. Something less drastic like the example below shows the production runs from two different periods but in the same year and the same sneaker.

After following the tips provided above, you should be in good shape of avoiding fake sneakers. One for sure way to avoid fakes all together is purchase from an authorized dealer. With that being said if you want to buy a shoe that has been sold out for years, make sure the online store is verified with a good track record. We have compiled a list of real Nike and Jordan websites which you can check out that have been proven to be safe. Maybe you do want to find a deal, we also have a list of authentic eBay sneaker sellers which you won’t have any problems with. If all else fails, you can always contact us and we will help to the best of our ability.