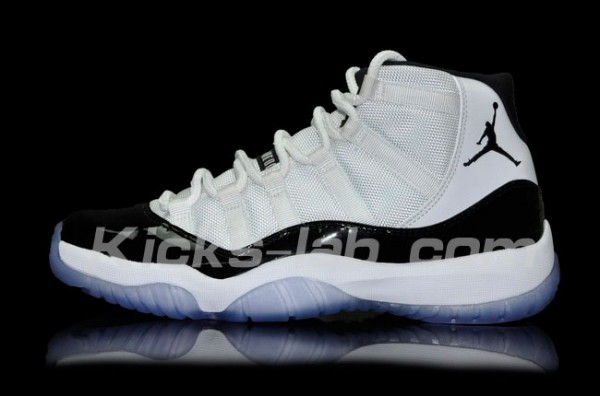 Some fear change, others loath it… Sneakerheads, specifically, are very weary of the idea. Performance sneakers have grown drastically since their initial conception. From the Converse Chuck Taylor to the Nike Air Force 1. The Air Jordan 1 to the Air Jordan 2011. Evolution has taken place, it was once celebrated and anticipated for months on end until the new product was released… now all you hear are cries for the past to be brought back to the present.

Our voices had been heard and the Retro was born. However, the Retro has also undergone some modifications. In what has been explained by Brand executives; to preserve what is left of the past to appease original collectors while still giving the public what they want.

With this past week being ‘Concord’ week, fans of the Air Jordan XI both clamored with joy and pecked away at keyboards in an angry fashion. The outsole is blue!?! Make it original, keep it the same! In other words, we fear change.

If things were constantly being brought back to life, exactly the way they had been years ago, wouldn’t you eventually loose interest in it?

The Concord Air Jordan XI first released in the ’95/96 season, then received the Retro treatment not too long afterward in 2000. Then in 2006 we were given a gift, just six short years later, in the form of the Air Jordan DMP Pack which featured the AJVI & AJXI. With another release of a White/ Black based AJXI hitting retail once again, this time things had to be a little different. Concord was removed, replaced with Black and Gold. I don’t recall one complaint about this change. A reversed Jumpman was featured on the left shoe for the first time… and again, no complaints. Now, in 2011, we will get the chance to own the AJXI in all of its White/ Black – Dark Concord glory and there are complaints about the outsole having a blue tint.

Most of you are probably sitting there saying; of course we’re going to complain, its not the same! Think about this… one of the largest complaints about the Air Jordan 3 & 4 are cracking midsoles and paint chipping. If Jordan Brand were to figure out a way to solve this problem, would you be opposed to it? If you would be more than happy to welcome this sort of change; why is that? It would no longer be the same as the OG… right?

The Air Jordan V had been Retro-ed in ’99, true to its original form. Then in 2006 they were again released with the addition of the ’23’. People hated this, still do. But why? Michael Jordan himself wore his AJ5’s on court with the ’23’ stitched to the side panel, technically this is an original feature.

We have been complaining about translucent soles turning yellow for years. Nike and Jordan Brand think they have found a way to slow the process down a bit, keeping your kicks looking fresh for a longer period of time. All of a sudden, this isn’t good enough because its not the same.

After all the complaints about these minor changes, there is always one thing that remains the same… the shoes will sell out, they will be purchased by those who complain and oppose this change. After the release is said and done, nobody will complain about the blue tint… mostly because there will be something new to complain about.

Are these changes really that bad? The changes are made to help the life of the shoe you’re about to throw $180 down on. I don’t know about you but if those blue outsoles help slow the yellowing process down, I’m game. If anything they aren’t really changes at all, they are enhancements… making something great even greater.

Evolution is a major factor which differentiates the human race from any other living being on the planet. Evolution and change are seen throughout the day, all day… everyday since the dawn of time. Footwear has evolved greatly within the last 10 years and I’m happy to see the product reflect this.

Change isn’t always bad if you keep an open mind.

How do you feel about change; good, bad, maybe you don’t mind as long as the shoe you’re after is brought back from the dead?