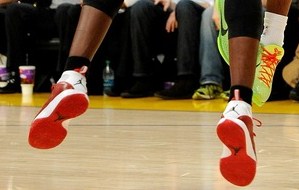 The Lakers just took a beating provided by the Miami Heat…

The beating started early on in the first quarter with D. Wade debuting the Air Jordan 2011 in the White/Red colorway. It was strange how he had switched back to the AJ2010 in the second quarter, either a possible on court performance issue or Wade may be a little more comfortable in the familiar AJ2010 which he has worn nearly all of last season.