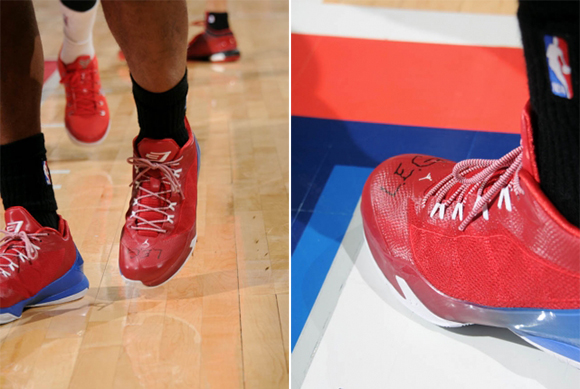 Jack Gallagher is a young kid who lost his mother to brain cancer. Before her passing she bought him a pair of Jordan CP3s which he wore during his basketball games. Even going through treatment his mom would still come to his games. She would finally loose the battle to cancer and soon after Jack’s sneaker out grew him. One of the shoes he keeps by his bedside in remembrance to his mom while the other is transformed into a vase at his mothers resting place.

Jack would put together a video asking that Chris Paul write his mothers initials on his sneakers which are ‘LEG’ (Lisa Elaine Gallagher). The video that he made finally reached CP3 and the result is truly heart touching.

When the LA Clippers met with the Pistons in Detroit, Chris Paul met with Jack Gallagher and his family, visiting for a half hour. He then gifted Jack with multiple pairs of the Jordan CP3.VIII and some CP3 gear. Paul would write Jack’s mother initials on his shoes, then after the game he gave the game worn pair to Jack.

“Sometimes, stuff is bigger than the game of basketball.”

We would have to agree as this moment Jack and his family will never forget.