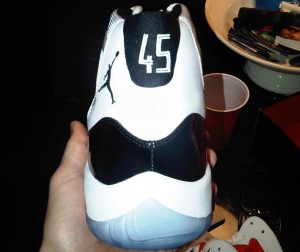 Yesterday an Air Jordan XI ‘Concord’ sample was spotted in the hands of Hip Hop artist Drake. There was no official word on if they were the 2011 version or just a sample pair. Sure enough, they have been confirmed as samples. Not just any samples mind you, they were once supposed to be released alongside the Air Jordan XII (12) ‘Taxi’ in the 2008 CDP. We’ve all seen the Air Jordan X (10) sample with the #45 stitched onto the side panel that were also going to be a CDP release then were eventually scrapped.