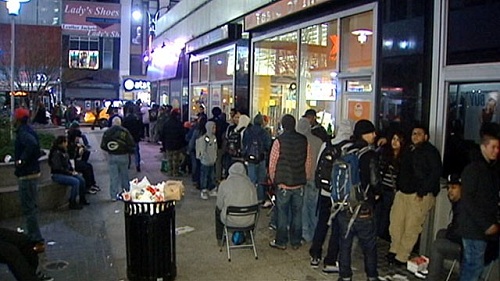 This morning, several Air Jordan carriers both online and in-store made the retro Air Jordan XI Concord available for purchase to a very eagerly awaiting public. However, we have already come across several reports of rather dangerous release circumstances. Rather unsurprisingly, police officers were called to help temper huge crowds of sneakerheads awaiting the opening doors to said carriers. However, things took a turn for the worse when in several locations including Virginia, Indiana, Texas & Florida, antsy mobs rushed into malls and led to several people being trampled on, doors being broken, and shoppers being taken into custody for such absurd acts as leaving underage children locked inside a car for the chance to get away and hopefully cop a pair. Most unfortunately, there are also reports of a young man suffering fatal stab wounds near the Washington, D.C. area in his pursuit of the classic basketall sneaker. Within hours resellers made pairs available on eBay for upwards of $500. We understand the passion for sneakers and even the allure of making an extra buck; however, when it results in the legitimate danger of crowds of people (especially those that include young children), then a line has to be drawn. Whether your blame Jordan Brand for keeping a tight watch on how many pairs are produced/released or the security/lack thereof afforded to different sneaker locations- the bottom line is that this has got to stop and a shift in focus must be reached in order to truly appreciate sneaker society without compromising our safety.