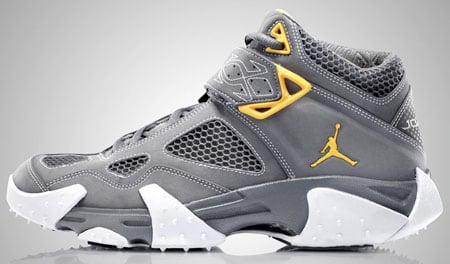 Just moments ago, the Air Jordan JAQ was previewed. Here’s a look at another JAQ that also features a very sleek and stylish color-way. Light graphite, varsity maize, and white are placed throughout the shoe with a dominant light graphite upper and varsity maize accents. Like we mentioned before, this Air Jordan JAQ is a little bit like the Air Jordan VI’s design, but brings something new to the table with a strap and spiked sole. Expect these to be released alongside two other Air Jordan JAQ’s on August 1st, 2008.