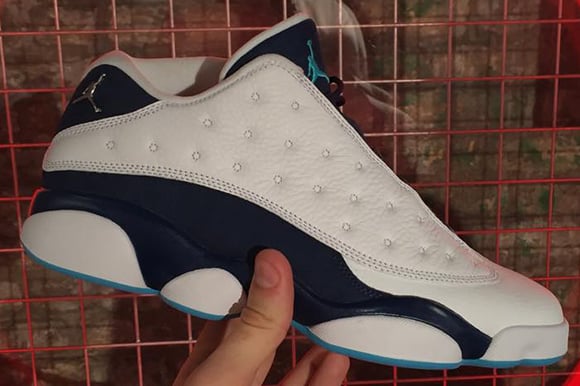 Over the week a few images leaked of the Air Jordan 13 Lows that are inspired by Michael Jordan’s team the Charlotte Hornets. They were not the best of looks, but at least we had something to stare at. Today we share with you a clean and fully assembled pair of the Jordan 13 lows.

The theme is on point to the Hornets jersey, with the low Jordan 13s featuring white on the uppers, metallic silver on the Jumpman logo towards the heel, midnight navy dresses the mudguard while turquoise lands on the outsole and Jumpman on the tongue.

The Hornets Jordan 13 low does not have a specific release date but an expected launch time frame of the Summer of 2015.