We have a while before the initial launch of the 2012 Air Jordan 4 Black Cement hits us, but for those of you that want to know what to expect, we bring to you this video.

Originally the Air Jordan 4 Black Cement Grey released in 1989. Fast forward to 1999 we have our first retro but by now most have cracked or are in unwearable condition. Jordan Brand decided to release them once again apart of their Countdown Pack (CDP) which came out in 2008. They were also packaged with the Air Jordan 19.

True to it’s original form, the 2012 Air Jordan IV Black Cement features a black nubuck upper, cement grey around the front part of the midsole, black and cement on the rubber wings, Jumpman on the heel, fire red hints on the sole, Jumpman logo on the tongue and a few places on the outsole.

Although this has not been confirmed from Jordan Brand, we may see a release on Black Friday which is November 23rd 2012. Official colorway is Black/Cement Grey-Fire Red and will retail for $160. You can grab a pair now at KickSole.com.

Make sure to check out our Air Jordan Release Dates page and Subscribe to SneakerFilesCom on YouTube. 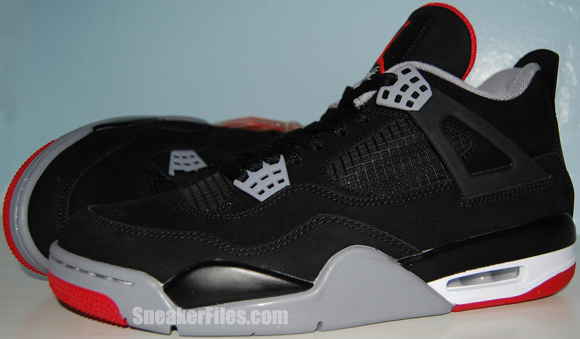