In 2002 adidas opened its SoHo New York store. 10 years later the brand is celebrating this milestone with the “Made for New York” collection.

The shoe celebrating their 10 year anniversary is the adidas Rivalry low and will release in 6 different colorways, shown in Black/Neo White. You can also pick up some matching apparel, including the crewneck in the video.

The Black/Neo White adidas Rivalry Low “Made for New York” utilizes a black leather base for its uppers, snake skin on the 3-Strpes, heel and top of the toe box and neo white on the midsole. Each pair will be numbered out of 150 with your respective number laser on the rear midsole.

All 6 pairs plus matching apparel will release at the Adidas New York SoHo location on September 21st 2012. 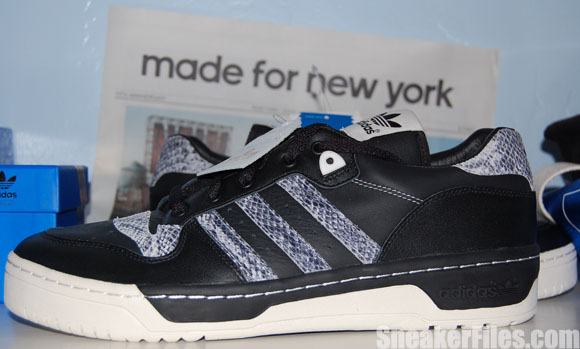