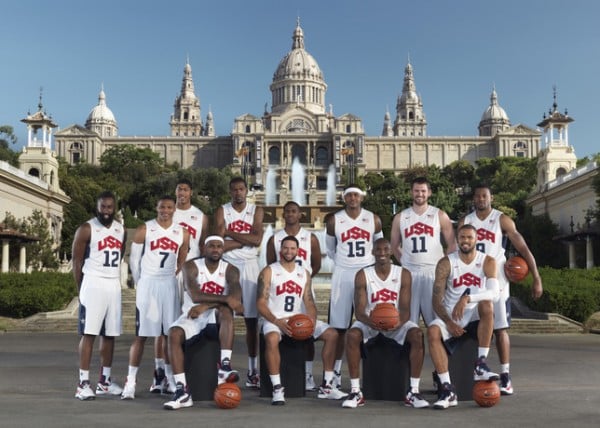 After a stop in Washington, D.C. to kick off World Basketball Festival 2012, USA Men’s Basketball moved on to Barcelona ahead of this upcoming weekend’s start to the 2012 Summer Olympic Games in London.

The USA Men´s Basketball team arrived Friday in Barcelona for training and exhibition games from July 20 – 25 and to be part of the Nike World Basketball Festival 2012, to train and prepare for a summer of competition.

The Magic Mountain of Montjuïc with the National Museum of Catalan Art (MNAC) in the background was chosen as the setting to photograph the team upon arrival in Barcelona.

With Barcelona being the USA team’s final stop of the 2012 USA Basketball National Team tour and the Nike World Basketball Festival 2012, the team seemed confident to repeat the successes of the Dream Team.

At the unique basketball setting of MNAC, fans can enjoy the games of 3vs3 “Museum finals,” Nike+ Slam Dunk contest, with national team athletes from USA and Spain.