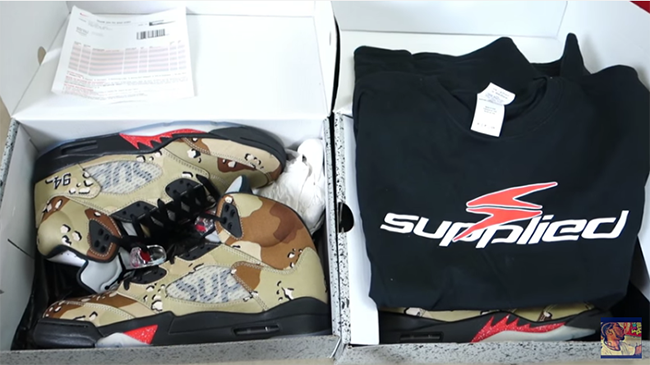 Supplied PDX who is also known as Get Supplied was being investigated starting back in March by Nike and today news broke that the website was shut down for selling almost $3 Million in fake sneakers. Over the years, we have heard they sold fakes, or in other words Grey Market, or B-Grades.

According to KOIN 6, Federal Agents had seized 1,560 pairs of Nike sneakers, 40 pairs of adidas, 7 Asics and 5 boxes of shoe boxes. They also seized electronics like cell phones, computers and more.

Here is more from the article that KOIN 6 wrote:
The investigation started March 5 when Nike revealed its private team of specialized investigators conducted a “discreet” probe into the online retailer Get-Supplied.com, a website owned by James Pepion, according to the federal search warrant. Get-Supplied also goes by the names “SuppliedPDX,” “Supplied Inc.,” and “Supplied”.

The website is accused of illegally selling stolen, counterfeit and “grey-market” Nike Jordan shoes and unauthorized pre-releases, records show. According to investigators, “grey-market” products are made from real or potentially stolen components outside of authorized Nike factories.

Nike determined Pepion operated his company, Get-Supplied.com, out of his Happy Valley residence, records show. He marketed and made announcements about which sneakers he was selling through his “SuppliedPDX” Instagram account and was reportedly using the email “swagsupply2012@gmail.com” on eBay and PayPal.

Investigators determined Pepion received a total of $2,615,988 into his PayPal account that was opened on January 16, 2012. PayPal included comments that Pepion received regarding the authenticity of the items being sold. They included phrases like: “fake”: “The shoes are fake so I am asking for a refund.” “My friend compared the shoes to a pair of Jordans (sic) that he has and it’s clearly a fake.”

Between March 20, 2015 and November 2, 2015, agents in Portland stopped several packages as they were headed to Pepion in Happy Valley. Of the 17 searches, “all of the shipments were counterfeit except one,” according to the search warrant.

Agents seized trash from Pepion’s residence on the 15000 block of SE Aspen Way and collected his financial records on August 27, 2015.

Pepion could be charged with wire fraud, trafficking in counterfeit goods and money laundering. As of Monday, no criminal charges have been filed in U.S. District Court.

According to the “Supplied” description in the Apples iTunes store, “Supplied Has Become The #1 Selling Sneaker Destination Online.”

Many of Pepion’s social media accounts have since been deleted. The “Get-Supplied.com” website is currently undergoing “rebuilding.”

“Nike aggressively protects our brand, our retailers, and most importantly our consumers against counterfeiting. We actively work with law enforcement and customs officials around the world to combat the production and sale of counterfeit product, and are supporting Homeland Security Investigations in this investigation.”