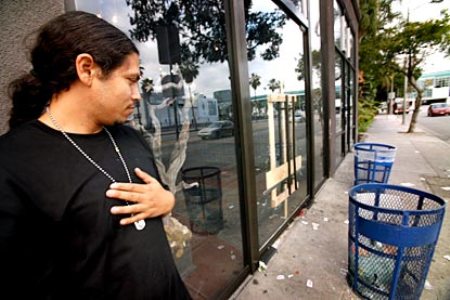 Earlier today we touched on the Holy Grail, a shoe store that was looted after the Los Angeles Lakers conquered the NBA Finals in Orlando. Richard Torres, owner of the Holy Grail, arrived on scene less than an hour after the game ended to find fewer than 20 pairs of shoes out of the 800 he had in stock. Neighbors told Torres and authorities that the celebrants broke down the door to the store yelling, “We want shoes, we want shoes.” Many of the vintage kicks are irreplaceable and the damage to the store’s innards is extensive; glass display cases are shattered, two computers, money, and accessories were looted. Torres estimated the damage at nearly $140,000 but expects to be covered by insurance. He hopes to reopen the Holy Grail by the end of the week. Via LA Times.