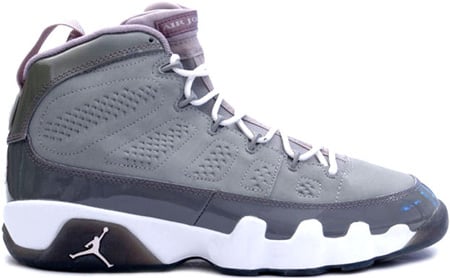 Following up the confirmation of the return of the “Bred” Air Jordan XI this December and possible “South Beach” LeBron 9 P.S. Elite release is another rumored Air Jordan retro drop for December 2012.

According to a number of sources around the ‘net, this holiday season could see the return of the “Cool Grey” Air Jordan IX. Originally released in 2002, this is arguably the most popular colorway of the IX and was produced for MJ to rock as a member of the Washington Wizards.

At this point the drop is obviously just a rumor (What ever happened to this year’s “Columbia” XI drop?), but if these do indeed make a comeback, they’ll be welcomed with open arms.

Stay tuned for more info around the possible 2012 retro of the “Cool Grey” Air Jordan IX.