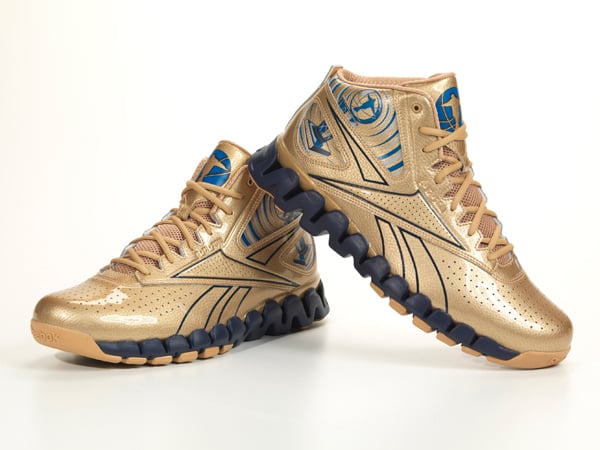 In light of the Dallas Mavericks’ recent 2011 Championship run, members of the team get special treatment, media coverage and most important of all, a ring.

Jason Terry is among those with a ring on this finger, along with a well deserved and fitting tattoo of the Larry O’Brien Trophy. Now that he’s earned on the ultimate spot light of 2011, he is awarded with the Reebok Zig Pro Future dubbed “JET Champ”.

This model of the Zig PF features Championship gold on the entire upper, with Mavs’ array of blue splashed all over it, keeping Jason Terry in mind in the design:

Jason Terry essentially designed it himself. He was at Reebok Headquarters back in August and sat down with some of our designers to create a special shoe to celebrate his NBA Championship. He wanted a bold gold upper to demand attention on the court, and obviously plays off the color of the Larry O’Brien trophy. After that, Dallas Mavericks colors were added to the shoe to work with the uniform on-court and an interpretation of the championship trophy was added with the JET logo to represent both his recent championship and infamous tattoo.

This is a 1 of 1 make-up that won’t be in stores, but you can see the JET himself rock them on Sunday.

Video: Reebok: Jason Terry Lands in Boston for His First Season with the Celtics