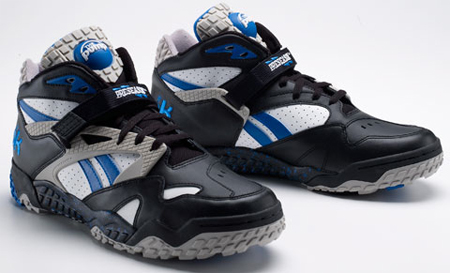 Earlier in the month, pictures of a popular 90’s cross trainer surfaced the internet entitled the Reebok Pump Pay Dirt Mid. Once worn by the likes of Roger Clemens and Emmit Smith, the Pump Pay Dirt Mid makes it 2008 debut in a simple combination of white, black, grey and blue.

Furthermore, other highlights included a speckled mid-sole, textured tongue, sole, side paneling and finished off with the classic Pump. Release is expected for next month at Reebok retailers. Retail is announced to be $95. Via Complex.