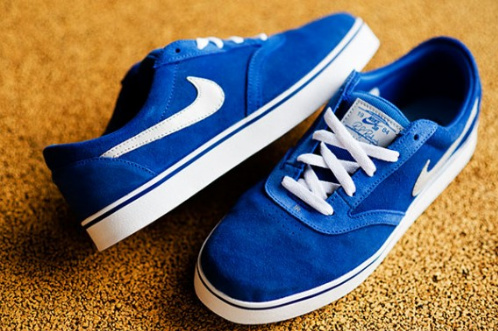 Pro skater Paul Rodriguez has been skating for Nike SB for quite some time now, and has also had the privilede have his own signature shoe line with Nike SB, a successful shoe line. With the P.Rod IV being introduced last year, along with P.Rod hybrid models like the Nike SB P.Rod 2.5 and Vulc-Rod, seems like Nike SB doesnt have it in mind to stop working with Paul. With images sufacing of new colorways of both the Nike SB P-Rod 2.5 and the Vulc-Rod. Two pairs of the Nike SB P-Rod 2.5, one featuring a blue suede upper with white trimmings, the other pair is dressed in a black suede upper with white trimmings also. As for the Vulc-Rod, two pairs one in a white suede upper, with blue accents, and the second pair is rumored to be a Diamond x Nike SB collab. With a teal suede upper, and black accents, its not a surprise the rumor started. Now no other information has been given, but stay with Sneakerfiles for the latest and take a look after the jump to see the new P.Rod colorways.