With the Skateboarding market growing at rapid speeds, Nike launched their SB line March 2002. To attract skaters, Nike advertised in magazines like Transworld Skateboarding magazine and Thrasher magazine. After a while, Nike SB (Skateboarding) started to hand out catalogs to some of the hardcore skate shops.

Nike knew they had a lot to compete against. A well known Basketball/Running shoe company coming into the Skateboarding world? Maybe a sign of good faith or a way to let others know that Nike is not just in this for the money, they sponsored and participated in many events around the world. 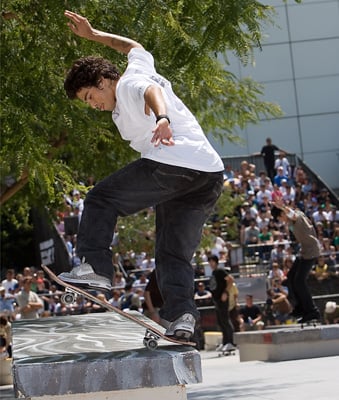 Even like the days of Michael Jordan playing ball, Nike needed a spokesperson, and what better to do than add a professional team of skaters. Here is a list of skaters on the Nike SB team:
-Brian Anderson
-Paul Rodriguez Jr.
-Chet Childress
-Daniel Shimizu
-Todd Jordan
-Richard Mulder
-Reese Forbes
-Gino Iannucci
-Danny Supa
With every skater, Nike has also made a shoe to best represent that person. For example the Nike Dunk Supa, Mulder, Todds, Forbes, Shimizu, Chet, Nike SB P-Rod (Paul Rodriguez Jr.) or the Nike SB FC Iannucci.