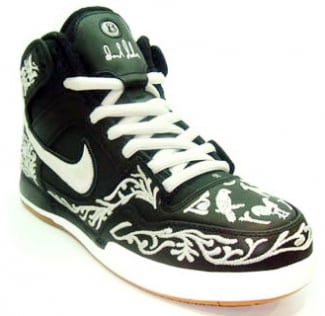 The Nike SB P-Rod II has been flying under the radar lately and with by adding special designers like Hiroshi Fujiwara and Tinker Hatfield, it has been gaining more and more momentum. The P-Rod II line has transitioned from the low-cut models into the high-cut version.

Only one of two high models, the P-Rod II seen above has been nicknamed “BO”, referring to the designer Sandy Bodecker, Nike’s VP of Sport Culture. The intricate design of the “BO” P-Rod II includes floral patterns and animal icons throughout the shoe. The “BO” P-Rod II High will be releasing in March at select Nike SB retailers. Via Limited Editionn.