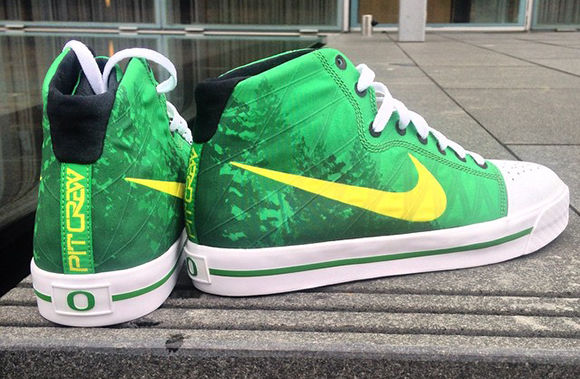 Oregon University students easily had the chance to get some of the schools exclusive sneakers. Rumor circulated that a new pair would be releasing for them, but which model was unknown. Everyone that it could be one of the Nike Basketball signature athletes lines, but turns out that isn’t the case. Instead an all new model was produce that falls into the casual sneaker category.

The Nike Oregon Ducks Pit Crew sneakers come in the schools colors of green and yellow. The uppers are dressed in green with a forrest silhouette. Yellow is slapped on the swoosh and ‘Pit Crew’ written down the heel, while a white (vulcanized?) midsole is used.

Unfortunately the Nike Oregon Pit Crew shoes will be an exclusive for students of the University.