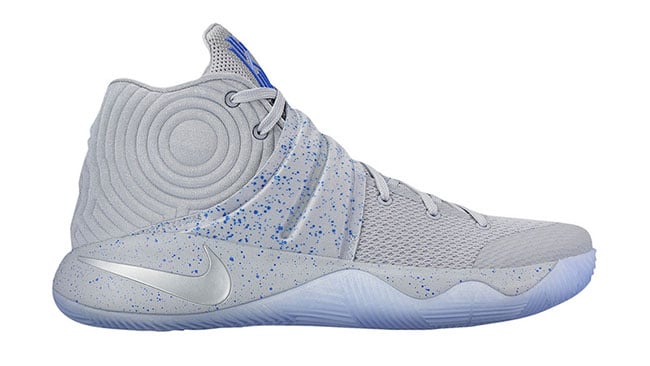 The Nike Kyrie 2 ‘Blue Speckle’ continues the Speckled theme we have seen on a few Kyrie 2 releases. The latest, featuring Blue, will be available this weekend.

The Blue Speckle edition of the Nike Kyrie 2 features a Wolf Grey, Metallic Silver and Racer Blue color combination. As you can see, predominate Grey is used which runs through the uppers, midsole and strap. Racer Blue is then used on the Kyrie branding and then speckled across the midsole and mid-foot strap. Other details include Metallic Silver on the Swoosh and a translucent outsole.

The Nike Kyrie 2 Blue Speckle will release on October 29th, 2016. You will be able to purchase at select Nike Basketball retailers. Upon it’s debut, retail price will be $120. Make sure to check back with us for a detailed look.