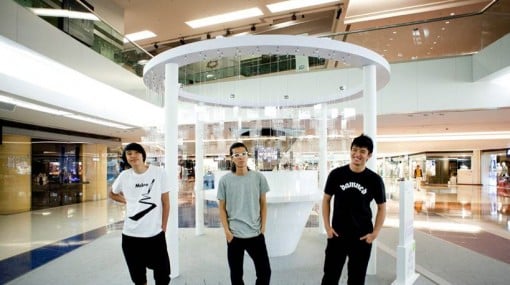 Nike Stadiums introduces XEX Group as a part of the Nike Flyknit Collective in Shanghai.

XEX GRP. is a new media art group and increasingly active in involving itself in a wider range of creative activities. They have taken part in various international art festivals, screenings and performances. With the interest and ambition in exploring unconventional new media for presentation, they transcend the boundary between cognition in its works. XEX means creation on non-existence.

Share a bit about the vision of your organization.

What are you working on at the moment?

We are working on the Nike XEX+ESKYIU “Flyknit Multiply” Interactive Wall [with ESKYIU] for the Nike Flyknit Collective project and Nike Festival of Sport here in Shanghai. We are also working on a Chinese Orchestral  project to create a new media art performance which will be staged in December, currently a commercial project  in Guangzhou, and soon a new interactive installation upcoming for a Chinese museum.

Technology. We are interested in all kind of new technology and as well how it transforms our lives. We always like to use it as a medium to inspire people.

What role has sport played in your lives?

We are a very active and sporty group. Jason, a-Kai and I belong to a basketball team and we play in a regular underground league. Jeff loves biking, he finished an amazing trip from Tokyo to Osaka last year.

Why are you looking forward to the upcoming Nike Flyknit Collective event Festival of Sport in Shanghai between 8/23-26?

It is really exciting for us, as this is the first time to be here for the festival. We look forward to seeing how all the participants and audience will be inspired by the Nike Festival of Sport!

Nike will conduct daily workshops around the installation from August 23-26, each led by an innovator from the region and tackling a specific Nike Flyknit tenet:  August 23 (Sustainability led by Arthur Huang), August 24 (Lightness led by ESKYIU and LEDArtist), August 25 (Formfitting led by ESKYIU) and August 26 (Performance led by Shanghai-based sound artist Yin Yi).

Leading regional innovator, architect, and designer Arthur Huang will join Nike’s Ben Shaffer and Dave Cobban, and leading Hong Kong multi-disciplinary architecture studio and project curator ESKYIU (Eric Schuldenfrei and Marisa Yiu) to unveil Huang’s unique installation within the confines of the Nike Festival of Sport in central Shanghai.  The Nike Festival of Sport is the largest grassroots multi-sporting event  of its kind in the region, attracting more than 150,000 youths in four days during its inaugural run in 2011. It is attended by global icons such as Lebron James and Kevin Durant as well as local Olympians and the region’s top grassroots athletes who have qualified to compete via territory competitions.  Huang’s innovative “Feather Pavilion” will feature at the Festival as the artistic centerpiece of Shanghai’s Nike Flyknit Collective workshop series, which have already enjoyed tremendous success in Milan, New York, and London.

On display from August 23-26 in Shanghai, the installation will then be relocated to Beijing as an official installation at Beijing Design Week from September 28-October 3.