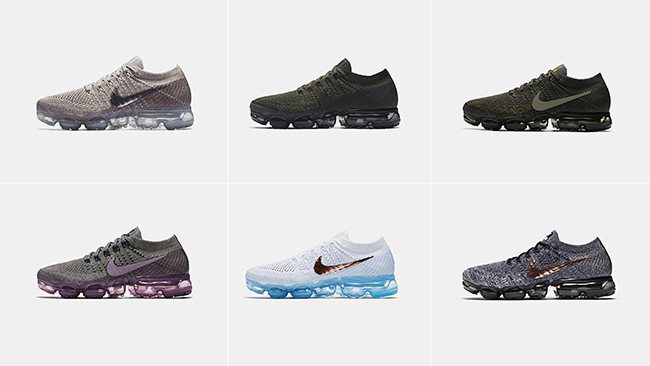 The Nike Air VaporMax will debut in an assortment of colorways during Summer 2017. While we have leaked a handful already, Nike Sportswear has officially unveiled seven upcoming colorways for the warmer months.

Starting things off we have the ‘Desert Moss’ and ’Tea Berry’ which the date has been pushed to June 29th. We also have a few drops in July which includes the ‘Chrome Blush’ and ‘City Tribes’ that debuts on July 7th. Following is the ‘Deep Red’ edition which will become available on July 13th.

The brand also unveiled the new Nike Air VaporMax ‘Explorer’ Collection which is inspired by historical exploration. Bronze-colored swooshes hint at the deep-sea diving helmets that opened up underwater frontiers, while the white and blue of the Explorer Light colorway reference space suits. The Explorer Dark colorway alludes to the gritty texture of faraway planets.

At the time of writing, the Nike Air VaporMax ‘Explorer Light’ and ‘Explorer Dark’ have yet to receive a release date. For now you can check out all the upcoming colorways by scrolling below.