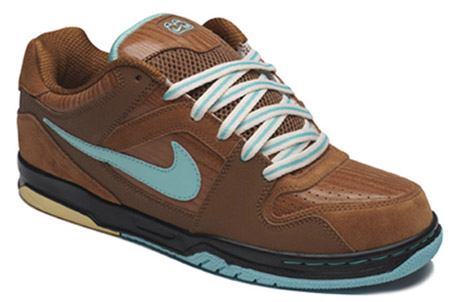 The shoe is called the Seagle Oncore and will be available at Active on December 15, 2006. It’s based on the car Nike 6.0 made, a six-wheeled custom AMC Eagle, thus the name Seagle. There are less than 1,000 pairs in existence, price is $75. It is driven all over the US but lives in Southern California with ex pro snowboarder Bobby Meeks, the official Seagle driver. He takes it to snowboard, surf, skate, wake spots all over.

When 6.0 wanted to create the ultimate road-trip vehicle, we didn’t mess around. We went straight to the artistic genius of Adam Haynes and design savvy of Chris Hotz, and told them to draw up their wildest fantasies. Over endless cups of coffee and late night meetings, their harebrained schemes swirled around the iconic 1979 AMC Eagle. At first they wondered: what vehicle could possibly top the weird and rugged utility of the AMC eagle? This, my young friends is the coolest car ever: the chassis of a Jeep, the body of a muscle car, and the side paneling of a 50’s vintage Woody.

After many hours spent scratching our heads and scribbling out plans, we came to a revolutionary conclusion. And if you know anything about 6.0, then you also know the answer to this riddle: TWO is better one! we knew there was no way to make the car better than to go ahead and add on more of a good thing! Torches sparked to life and saws buzzed, and two AMC Eagles were joined together in a decidedly un-holy matrimony. After days of labor, the vehicular spawn of 6.0 rolled out of Turtle Transit’s garage in Lancaster, Massachusetts. Jacked up and tricked out; six huge wheels set on gas shocks, larger, longer and more attitude than a 70’s Firebird car convention, the Seagle was born. With a roof rack full of boards and bikes, and a serious amount of muscle under the hood, the Seagle can and will haul it all; to the beach, to the lake, to the mountain, to the skatepark, and everywhere worth shredding in between.

Veteran road warrior and 6.0 ambassador Booby Meeks, recently fired er’ up and headed south to Texas, the 2nd largest state in the union (sorry man, AK has got you beat), on tour to the Texas Ski Ranch and the Platiunum Mutant Scavenger Hunt contest. The Seagle made friends everywhere she went- gas stations, truck stops, even the skate spot where Bobby got busted by the cops; no one can resist the charm of this stretch Eagle. No ticket that time, no sir. The cop was simply too amazed to write out the citation.

Next stop, Texas! Second biggest state; get ready to meet the world’s biggest Seagle! Hasta la pasta for now compadres, stay tuned for more entries in the Seagle diaries at: Nike6.com. Via Kix-Files.