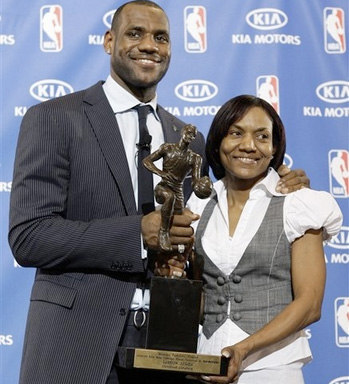 Earlier today, Lebron James, “The King” himself, was crowned the 2008-2009 NBA Most Valuable Player (MVP). The ceremony was fittingly held at the school where it all started for James—St. Vincent-St. Mary High School. LeBron led the MVP race with 1,172 votes, while the second place finisher, Kobe Bryant, totaled a mere 689 votes. There is no doubt that LeBron was a beast on the courts this year, but his sneakers of choice were also quite impressive. He began the year with a plethora of colorways of the Nike Zoom Lebron VI including the Hardwood Classics, the Fairfax, and the All-Star Game ZLVI, and he is currently rocking the Zoom Soldier III (3) for the remainder of the playoffs. Sneaker Files would like to congratulate Lebron James on his great accomplishment at such a young age, and we wish him the best of luck for the future. Pictured: LeBron James with his mother, Gloria.