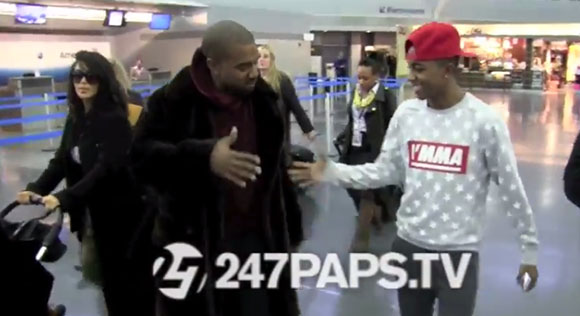 Paparazzi caught up with Kanye West and Kim Kardashian at JFK Airport when a fan ran into Mr. West. The individual was wearing the newly released Nike Air Command Force in University Red when Kanye asked him “which shoe would you rather have between these (points to fan) and these (points to his Yeezy Boost).

The fan quickly responds and points to Yeezy’s kicks. West then responds “If I can give you these right now, would you throw those in the trash?”. The young man simple responds “of course”. Kanye then says he will take down his information, which looks like someone from his entourage did. So seems like your best bet would be to meet Kanye personally and wear some Nike’s to get a free pair.

You may dislike Kanye, but sneakerheads love him. He is also smart too. He knew he was being recorded and was able to promote his line with adidas. Since the video went live not only did every sneaker source cover the video but entertainment websites.

Will you be picking up the adidas Yeezy Boost or Yeezy 750 Boost?