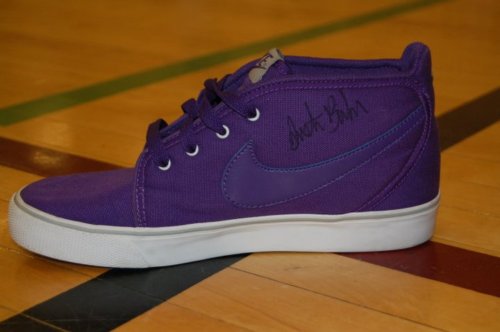 Do you have a case of Bieber Fever? Yeah… me either, but apparently someone with money to blow does.

Bieber recently gave his former school, Stratford Northwestern Secondary School, a signed pair of worn Nike Zoom Toki’s. They of course made their way to eBay and are currently on auction. Right about now, you’re rolling your eyes and wondering why this is being reported on… Well, JB gave his school a used sneaker in which he then signed (he only gave the school the right shoe by the way) and the auction is currently listed at $9,600.00! There are signed, game worn (both left and right shoes included) Air Jordan’s that haven’t reached this amount of money. You know, MJ… the GOAT aka the greatest basketball player to ever have graced the hardwood…

Proceeds of the auction will then go towards the school so they can begin construction on a broadcasting and communications studio for the students. Kind of makes the Nike/Jordan Brand Doernbecher releases seem meaningful now doesn’t it? By the time the auction ends they’ll be able to build a broadcasting & communications studio that will no doubt rival the Bat Cave.